The Serengeti National Park is a Tanzanian national park in the Serengeti ecosystem in the Mara and Simiyu regions. 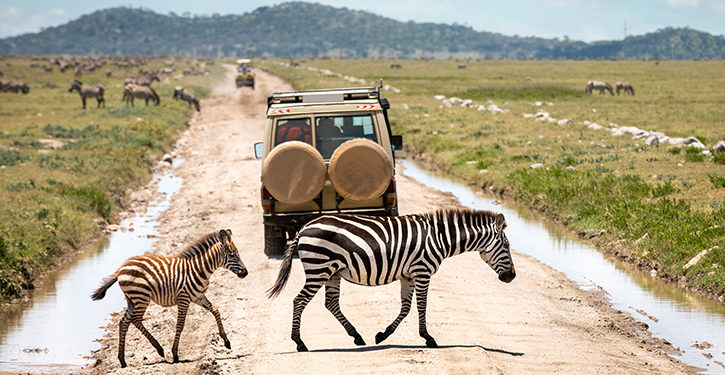 Named for the Maasai word “siringet” (which translates roughly as “the place where the land runs on forever”) Serengeti National Park is the among the oldest game reserves in Tanzania. It’s also one of the most iconic safari destinations on the African continent. Located in the north of the country, it partly adjoins the Kenyan border and together with the Masai Mara National Reserve provides the backdrop for the annual Great Migration – considered by many to be the planet’s most impressive natural event.
It covers over 5,700 square miles/14,700 square kilometers, including vast expanses of grassland plains and tangled riverine forest.

History of the Park

For more than 200 years, the Serengeti ecosystem provided fertile grazing land for nomadic Maasai tribes. The first European visited the area in 1892, and thereafter it became a popular haunt for big game hunters. In 1921, the colonial British administration addressed the decline in the Serengeti’s lion population by forming a partial reserve in the area. This was converted into a full reserve eight years later, and eventually established as the Serengeti National Park in 1951. Controversially, the government evicted Maasai living within the park’s borders in 1959.
In 1981, Serengeti National Park was inscribed as a UNESCO World Heritage Site in recognition of its incredible ecological importance.

Traditionally, the park is divided into three distinct geographic regions. The largest of these is the southern Serengeti plains—an iconic, largely treeless savannah landscape that serves as a breeding ground for the wildebeest and other antelope that congregate here from December to May before beginning their migration northwards. The Western Corridor includes the Grumeti River and its adjacent forests. Visitors flock to this area of the park from May to July when the wildebeest migration passes through; but it’s also a great place to spot waterbirds and other aquatic species all year round.
Finally, the remote northern Serengeti woodlands are the best place to spot elephant and giraffe, and to observe the spectacle of the migration’s Mara River crossings.

Serengeti National Park is home to the greatest concentration of plains game in Africa. This includes approximately two million wildebeest, 900,000 Thomson’s gazelles and 300,000 zebra. Other antelope species range from the abundant Grant’s gazelle and Coke’s hartebeest to rarer creatures like the dik-dik and the roan antelope. This proliferation of prey animals inevitably results in healthy predator numbers. Indeed, the Serengeti boasts Africa’s largest population of lions and is one of the best places in the world to spot the elusive leopard.
Here, it’s also possible to see cheetahs, two species of hyena and the endangered African wild dog. Smaller felines and nocturnal animals like the aardwolf and ground pangolin come out at night.

It is possible to see all of the Big Five in the Serengeti, although the small reintroduced population of black rhino are exceptionally difficult to spot.

Those with a passion for birdwatching will feel right at home in the Serengeti, which boasts no fewer than 500 resident and migratory bird species. Five of these are endemic to Tanzania, including the grey-breasted spurfowl, the rufous-tailed weaver and the gorgeously colorful Fischer’s lovebird. Near-endemic specials like the Usambiro barbet and the Hildebrandt’s starling also deserve a place on your Serengeti wish list. The park provides a refuge for several species of endangered or critically endangered vulture, and has the highest ostrich population in Africa. It’s also home to the continent’s largest flying bird, the kori bustard.

For many visitors, the Serengeti’s number one attraction is the opportunity the park affords to witness the Great Migration firsthand. Many safari operators and mobile camps are dedicated to putting you at the heart of the action; whether that’s watching newborn calves take their first steps in the grasslands of the south, or experiencing the drama of a Mara River crossing. To view the migration, you’ll need to time your trip carefully, as the herds’ movements are dependent on the rains and can change from year to year. Regardless of when you travel, a standard game drive gives you a front-row seat to the Serengeti’s incredible biodiversity.

A traditional jeep safari is just one of several wildlife viewing experiences offered by lodges in and around the Serengeti. Although night safaris are banned within the park itself, many operators offer after-dark game drives in the private concessions of the greater Serengeti ecosystem. These are the only way to see the region’s fascinating nocturnal wildlife. Other exciting options include walking safaris, horseback safaris and even charter flight safaris. At the top of our bucket list is a sunrise hot air balloon safari—a very expensive and exclusive once-in-a-lifetime experience that will stay with you long after you return home. In the unlikely event that you tire of wildlife spotting, you can also take part in a cultural visit to one of the Maasai villages located just outside the park boundaries; or drive south to the archaeological site at Olduvai Gorge. Here, a small museum gives you an insight into the life’s work of Louis and Mary Leakey, whose anthropological discoveries both at Olduvai and nearby Laetoli inform our understanding of human evolution.

Serengeti National Park is famous for its 5-star camps and lodges, and accommodation is notoriously expensive. You have several options to choose from. Luxury lodges like the Four Seasons Safari Lodge Serengeti offer every conceivable creature comfort and the reassurance of four solid walls. Permanent tented camps combine the romance of staying under canvas with the decadence of formal furniture, staff and gourmet dining; while mobile tented camps follow the migration making sure that you’re always at the heart of the action. Recommended permanent camps include &Beyond Grumeti Serengeti Tented Camp and Kirawira Serena Camp; while top mobile picks include &Beyond Serengeti Under Canvas or Scott Dunn’s Serengeti Safari Camp.

For those on a budget, the only relatively affordable option is the park’s public campsites, priced at $30 per person per night. Amenities are basic, and you’ll need to be entirely self-sufficient, bringing with you your own food, water and cooking equipment. You’re likely to share the space with overland tour groups, which can be a pro or a con depending on how much you value peace and quiet.

The best time to travel to the Serengeti depends entirely on which part of the park you plan on visiting and what you want to see while you’re there. The June to October dry season is the best for general game viewing, as foliage is less dense and animals congregate at the waterholes, making them easier to spot. However, if you want to see the wildebeest migration, the herds gather in the south from December to May, then move into the Western Corridor from May to July. To see the herds crossing the Mara River, you’ll need to be in situ in July, August or November. The November to April rainy season is best for birding, because resident birds are in breeding plumage and migrant species arrive at this time from North Africa and Europe. If you plan to travel during the heavy rains of April and May, be aware that some lodges and roads may be closed and mosquitoes are at their worst.

Those that travel to Serengeti National Park by road will most likely enter through the Naabi Hill Gate in the southeastern section of the park. The gate is a 2.5-hour drive from Ngorongoro Conservation Area and a seven to eight-hour drive from northern Tanzania’s safari capital, Arusha. Some companies will arrange road transfers from Arusha, while others pick you up from airstrips located within the park. There are several of these, including Kusini and Ndutu in the south; Seronera in the centre; Lobo, Kleins and Kogatende in the north and Grumeti or Sasakwa in the Western Corridor. These small airstrips are served by charter flights from Arusha or Kilimanjaro.

Entrance to the park is priced at $60 per person per day for non-resident adults aged 16 and over. Children 5 to 16 are charged at $20 per person, while children under 5 go free. If you plan on self-driving, you will also need to pay a $40 vehicle fee per day.