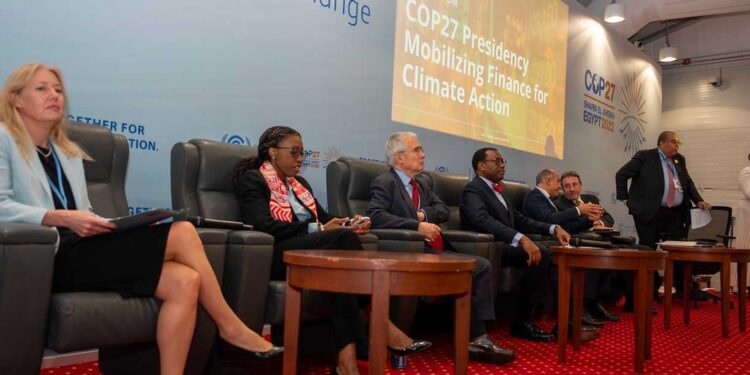 The roadmap draws on the findings of a recently released report, Finance for climate action: Scaling up investment for climate and development(link is external), produced by a panel of experts chaired by Vera Songwe and Lord Nicholas Stern.

The discussions during the panel session underscored the need to boost effectiveness of policies by tailoring them to countries’ needs. The report advocates a rapid and sustained investment push to drive a strong and sustainable economic recovery from overlapping crises and to deliver on shared development and climate targets.

“The scale of investments needed in emerging markets and developing countries over the next five years and beyond will require a debt and financing strategy that tackles festering debt difficulties, especially those of poor and vulnerable countries,” Songwe said. She added that reforms must lead to a major expansion of domestic and international finance –public and private, concessional and non-concessional.

Adesina reiterated the call for International Monetary Fund Special Drawing Rights (SDRs) to be channeled to African countries through the African Development Bank. “SDRs will play a big role in helping Africa’s climate action, and the African Development Bank is well-positioned to leverage this reallocation four times to help mobilize financing for countries that need it most,” he said.

“The world needs development finance at scale for different types of risks, and data must also be made available to stimulate increased private sector investment into climate finance,” Pfeifer said.” If we get the whole system working together, we can make a lot of progress,” she added.