Maltese lawmaker Roberta Metsola has been appointed to the largely ceremonial role of presiding over the EU Parliament, succeeding Italian politician David Sassoli, who passed away at the age of 65 earlier this month. 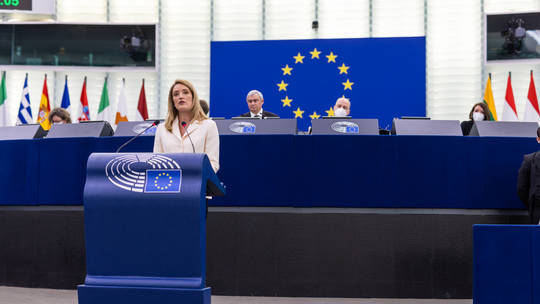 In a video posted to Twitter ahead of her election, Metsola said it was “time that the European Parliament is led by a woman,” so the EU can send a positive message to “every single young girl” across the continent.

In her pledge to parliamentarians, Metsola said she wanted to “re-capture that sense of hope & enthusiasm” in the European project, seeking to connect with citizens beyond the “bubbles” of Brussels and Strasbourg.

When just a student, Metsola campaigned for Malta to join the EU, which it did in 2004, becoming the bloc’s smallest member state with a population of just over 500,000.

Before Metsola’s election, the EU Parliament has only had two female presidents, both from France, since becoming a directly elected assembly: Simone Veil from 1979 to 1982 and Nicole Fontaine from 1999 to 2002.

Ahead of the deadline for nominations at 5pm local time (4:00 GMT) on Monday, four candidates, including Metsola, had put their names forward. She defeated Sweden’s Alice Bah Kuhnke, Poland’s Kosma Zlotowski, and Spain’s Sira Rego.

The election was triggered by Sassoli’s passing on January 11, 2022, after he had been admitted to hospital with a severe case of pneumonia caused by legionella and suffered “serious complication due to a dysfunction of the immune system.”