The Russian police entry on the site says Tikhanovskaya "is wanted under an article of the Criminal Code", but does not specify which article. 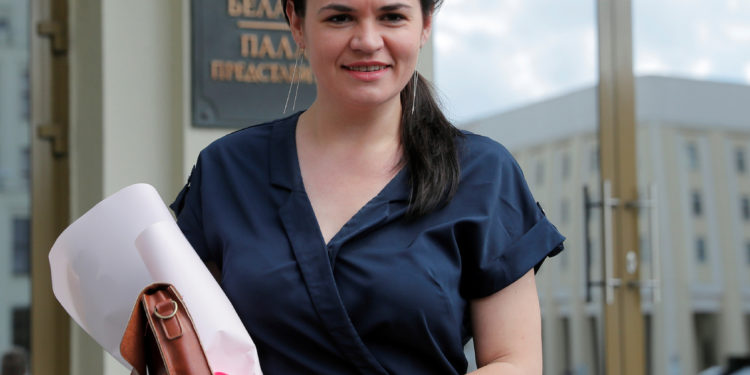 Russia added Belarusian opposition leader Svetlana Tikhanovskaya to its wanted list on a criminal charge on Wednesday, according to the Russian Interior Ministry’s website.

Russia automatically added Tikhanovskaya to the list after Belarusian authorities added her to their own list, the state-run Tass news agency quoted a source in Russian law enforcement as saying, adding that the arrest warrant extends to Russia due to an agreement between the two nations.

Tikhanovskaya claimed victory against Alexander Lukashenko in Belarus’ Aug 9 presidential election but fled to neighboring Lithuania soon after, citing pressure from the authorities.

According to the Central Election Commission’s official results, the incumbent president won by a landslide, garnering 80.1 percent of the vote. Tikhanovskaya, Lukashenko’s closest rival in the race, came in second, with 10.12 percent of the ballot.

However, the opposition refused to recognize the election outcome, and mass protests erupted in downtown Minsk and other Belarusian cities.

Belarusian authorities in August opened a criminal probe into alleged attempts to “seize power” when opposition figures including Tikhanovskaya formed a Coordination Council to oversee a peaceful transition of power after the election.

Nearly all leading members of the council have been jailed as part of the criminal case or have fled the country.

Russia placed its support behind Lukashenko following the vote, but the European Union refuses to recognize the election results and has drawn up sanctions against Belarusian officials it says are responsible for vote-rigging and a violent crackdown on protesters.

Belarus has accused Lithuania and Poland of interfering in its internal affairs by hosting Tikhanovskaya and other opposition figures and refusing to accept the election result.

Belarus recalled its ambassadors to Poland and Lithuania last Friday and told both countries to reduce the number of staff at their embassies in Minsk.

Tikhanovskaya met German Chancellor Angela Merkel on Tuesday in Berlin, where she appealed for help.

“I am very grateful to Germany and all the German parties who are so supportive of the Belarusian people in their fight for freedom, in their fight for new honest and transparent elections,” Tikhanovskaya said after the meeting, which lasted 45 minutes.

During her visit to the German capital, Tikhanovskaya said she wanted to meet with Russian President Vladimir Putin.

The opposition leader has been looking for Russia’s support for weeks, as Tikhanovskaya has repeatedly said she is not anti-Russian.

Kremlin spokesman Dmitry Peskov responded on Wednesday that Putin had no plans to meet Tikhanovskaya.

“No contacts are being planned,” he said. “Tikhanovskaya is not in Belarus. One can hardly say that she is somehow involved in Belarus’s life.”