With Russia unwilling to enter a second lockdown, officials and experts expect the number of infections nationwide to remain high until February. 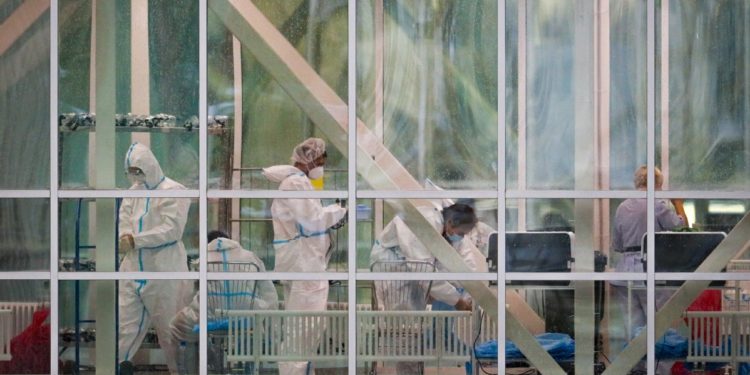 A second, record-breaking wave of coronavirus infections is sweeping Russia, with the country’s regions the hardest hit.

According to many observers, the first wave of infections never really ended.

As of Monday, more than 1.79 million COVID-19 cases and over 30,700 deaths had been reported in Russia. The country ranked fourth globally in terms of confirmed cases, behind the United States, India and Brazil, according to data from multiple sources.

Russian cities, including St. Petersburg and the Western enclave of Kaliningrad, have reported their highest caseloads since the outbreak in the spring, while in the past month, COVID-19 hospitalizations in the Moscow area have doubled.

However, in contrast to the situation in spring, less than 30 percent of the latest cases have been reported in Moscow. The capital has also managed to avoid the shortage of hospital workers and beds it experienced for a short period earlier during the outbreak.

According to The Moscow Times, five large hospitals across the city were recently reserved for COVID-19 patients by authorities in the capital.

Alexander Kupurin, a doctor at Kommunarka Hospital in Moscow, said: “We are not overwhelmed. There is a lot of work, but things are going steadily.”

However, Vasily Vlassov, an epidemiologist at the Higher School of Economics in Moscow, said the situation in the regions is very different.

Vlassov said that while the surge in infections can be partly explained by improved testing, there is an “undeniable” rise in the number of cases nationwide.

“As is usually the case, the regions don’t have the same resources as Moscow and St. Petersburg, and they never really had a break from the virus in the summer,” he said.

Dmitry Aleshkovsky, board chairman of the charity foundation Nuzhna Pomosh, said that in the Siberian city of Tomsk at least one hospital is offering so-called “sitting hospitalizations” to COVID-19 patients due to a shortage of beds.

The Tomsk Regional Health Department said many people had gathered in hallways at City Medical Unit Number Two due to “hospitalizations rising to 90－95 people per day”. In response to the situation, the hospital’s emergency room raised its number of beds from 80 to 150.

The Kommersant newspaper quoted medics working in hospitals in regions throughout Russia as saying there are severe shortages of hospital beds and workers.

Alexei, a surgeon working at the Infectious Disease Hospital in Elista, the capital of the republic of Kalmykia, said: “We knew this was coming, yet we were caught off guard anyway.”

Alexei, who declined to give his surname, said the hospital does not have enough beds and is being forced to turn away patients who are not in a critical condition.

On March 25, when Moscow experienced the biggest rise in the number of coronavirus cases since the outbreak began, the city health department said patients with mild cases could recover at home, rather than in hospital.

Despite the surge in infections, Russia has so far shown little desire to reintroduce a full lockdown or other quarantine measures.

Officials have said they are not planning another lockdown.

On Oct 21, President Vladimir Putin said during a meeting with members of the Russian Union of Industrialists and Entrepreneurs: “Regarding complex total restrictive measures, we do not plan to do this.”

The members asked the president to avoid another nationwide lockdown, following that imposed from the end of March until mid-May, when the majority of enterprises were closed and workers were sent home. Putin said targeted restrictions would remain for now, as they have proven effective.

With Russia unwilling to enter a second lockdown, officials and experts expect the number of infections nationwide to remain high until February.

On Nov 2, Health Minister Mikhail Murashko said at a meeting of the presidium of the government’s Anti-Coronavirus Coordination Council that the coronavirus situation in Russia remains tense.

Public health researchers at Russia’s public health watchdog Rospotrebnadzor have forecast that new infections will reach a peak and stabilize this month.

Alexander Gorelov, deputy director of Rospotrebnadzor’s Central Research Institute of Epidemiology, said the country may witness a rapid rise in new cases of the disease in the first half of this month.

“Cases in various regions start to rise at different times, so peak levels will be reached at different times as well,” he said. “It is hard to make more precise forecasts, because the epidemiological process depends on numerous factors, including weather-related and social ones.”

Gorelov called on the public to “realize the complexity of the current epidemiological situation “and observe all measures aimed at reducing risks.

To tackle the latest situation, the government has been organizing hospital beds for the regions.

Murashko said that by the middle of last month, up to 182,000 beds had been allocated nationwide for coronavirus patients, with 90 percent of the beds in intensive care units being vacant. He added that some 2,800 patients infected with the virus are in ICU beds.