Russian President Vladimir Putin urged on Tuesday an end to "illegitimate sanctions" against targeted countries in order to give the global economy a better chance to recover from the coronavirus pandemic. 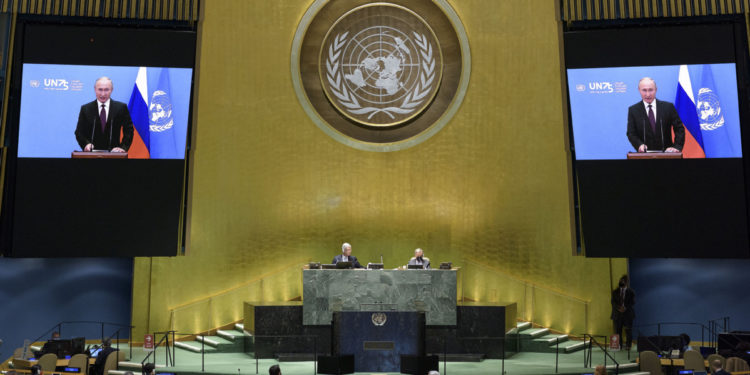 Putin also stressed the need for multilateral cooperation against COVID-19 during a video speech he gave to the United Nations General Assembly.

“Freeing world trade from barriers, bans, restrictions and illegitimate sanctions would be a great help in revitalizing global growth and reducing unemployment,” he said.

Putin has been pushing for years for the United States and the European Union to drop the sanctions they imposed on Moscow after Crimea was incorporated into Russia following a referendum in March 2014 that Ukraine and Western countries refuse to recognize.

The Russian president warned countries against unspecified “interference” in the domestic affairs of others, and said “cybersecurity also deserves most serious deliberation within the UN”.

Putin’s speech came amid heightened tensions between Russia and the West over opposition figure Alexei Navalny, who had been treated in Berlin for what German authorities said was a nerve agent poisoning.

The EU is also pondering sanctions against Belarus－an ally of Russia－over the country’s disputed presidential election and crackdowns on protesters. Navalny was discharged from Berlin’s Charite hospital on Wednesday.

Kremlin spokesman Dmitry Peskov said on Tuesday that the US is addicted to sanctions, and hardly anyone in the world approves of this practice.

In his speech, Putin stressed the importance of the UN Security Council’s permanent members retaining their veto powers, as global developments have an effect on the work of the council－the UN’s principal decision-making body.

“Our logic is that the Security Council should be more inclusive of the interests of all countries, as well as the diversity of their positions, base its work on the principle of the broadest possible consensus among states and, at the same time, continue to serve as the cornerstone of global governance, which cannot be achieved unless the permanent members of the Security Council retain their veto power,” Putin said.

The Russian leader hailed the country’s creation of the coronavirus vaccine Sputnik V, though it has not yet completed large-scale clinical trials.

He reiterated that Russia is open to partnerships with other countries over the vaccine.

The vaccine was developed by Moscow’s Gamaleya research center, and Russia announced in August that it was the world’s first to be registered.

“We are ready to share our experience,” Putin said, offering to supply other countries with “a Russian vaccine that has shown its reliability, safety and effectiveness”.

He cited cases of the coronavirus among UN staff and offered to give them the Sputnik V vaccine.

“Russia is ready to give the UN staff all the necessary professional help. In particular, we propose offering our vaccine for voluntary vaccination of staff of the UN and its subsidiaries,” Putin said.