The International Department of the CPC Central Committee said a joint open letter initiated by the CPC was endorsed by more than 230 political parties of various political colors in more than 100 countries. 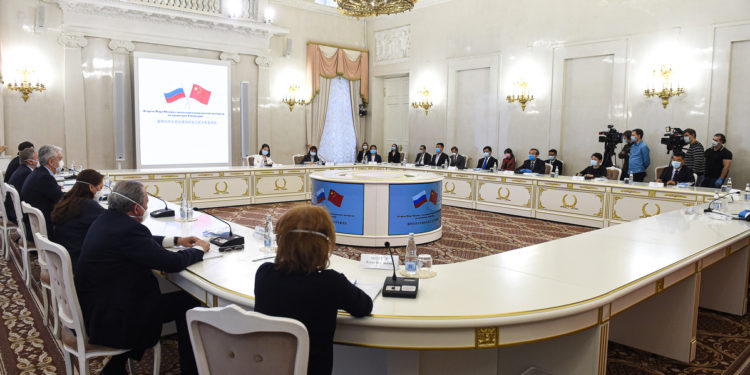 Members of Chinese medical team to assist Russia's ongoing efforts in the fight against COVID-19 meet with Moscow Mayor Sergei Sobyanin in Moscow, Russia on April 13, 2020.

Russia highly values the call by the Communist Party of China for resolute and forceful measures to be taken to overcome the COVID-19 pandemic, supporting each other and pooling global resources, said Andrey Klimov, first secretary of the general council of Russia’s United Russia party.

The pandemic poses “the most urgent and serious challenge” to human health and world peace and development, and countries should strengthen cooperation to fight it, the letter said.

Klimov, who is also the deputy chairman of the Russian Council Committee on Foreign Affairs, said in an exclusive interview with China Daily that China has made great strides in battling COVID-19, gaining time and providing expertise to others.

“Thanks to the work by the Chinese government and medical personnel, the number of infections in the country has fallen rapidly,” Klimov said.

The CPC’s call to enhance international collaboration is the first appeal from the main political parties around the world since the epidemic broke out, Klimov said.

United Russia, the largest party in Russia, totally stood with the appeal by the CPC and agreed that the epidemic is a joint challenge to the global health system. All countries should give priority to protecting people’s health, implement effective measures to prevent the coronavirus spreading, strengthen international collaboration and build the community of common health for all mankind, he added.

The CPC stressed the need for science-based and professional discussions of issues such as the origin of the virus, and criticized the politicization of public health issues and the stigmatization of countries amid the pandemic.

United Russia received the joint letter, which was signed by representatives of more than 200 political parties in Asia, Africa, Europe, the Americas and Oceania, on April 2.

“We took the letter seriously because this is an appeal from our Chinese comrades, our political partners, and good neighbor,” Klimov said.

Under the leadership of the CPC, Chinese people have followed strict measures their government has adopted since the outbreak began, which perfectly demonstrates the role of China as a great and responsible power in the international arena, he said.

“Chinese scientists, doctors, medical workers, as well as central government and local authorities managed to take control of the coronavirus as much as possible within three months. Thus we all think if the world is able to do what China did, and takes the problem and its international obligations very seriously, the pandemic may be eased soon.”

The CPC has passed on its knowledge and expertise in fighting the epidemic to more than 400 political parties worldwide and has sent medical groups to many countries, Klimov said.

In January China gave Russia information about the genome of the novel coronavirus and methods of diagnosis and treatment, which had significantly reduced the number of deaths from the infection in Russia.

Klimov suggested the CPC and United Russia bring together researchers from both countries to study the virus and to test reagents, vaccines and medicines.