African Development Bank Group President Dr Akinwumi A. Adesina arrived in Dubai today at the start of a three-day official visit to the United Arab Emirates. 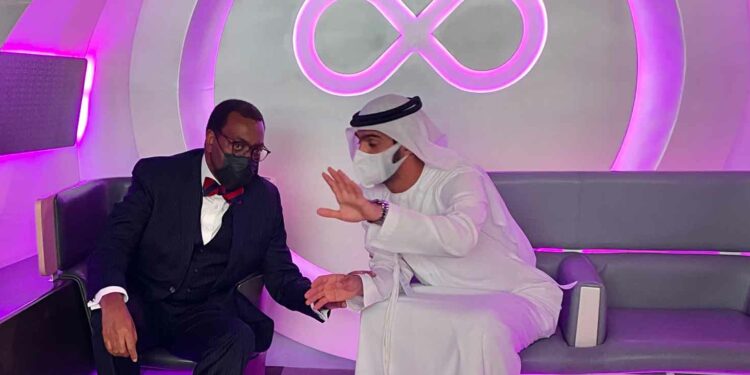 The Bank Group chief is expected to meet with His Highness Sheikh Maktoum Bin Mohammed Al Maktoum, Minister of Finance of the United Arab Emirates.

Adesina will also have bilateral meetings with other senior members of government and heads of parastatal companies. They include discussions with Minister of State for International Cooperation, Her Excellency Reem Al Hashimy—who is also Managing Director of Expo 2020 Dubai—and the Minister of State for African Affairs, His Excellency Sheikh Shakhbout bin Nahyan bin Mubarak Al Nahyan.

Much of the visit’s focus will be on strengthening ties and building closer collaboration between the African Development Bank and the United Arab Emirates.

“We are keen to see the United Arab Emirates become a valued partner and a significant investor in Africa,” said Adesina, adding: “There is a lot that the African Development Bank and the UAE can do together.”

Given the African Development Bank’s strong push on financing infrastructure on the continent—among its other equally important priority areas—Adesina will meet with the Dubai Ports World CEO, His Excellency Sultan Bin Sulayem. Dubai Ports World is the biggest port operator, operating in 78 marine and inland terminals in more than 60 countries. The African Development Bank has been active in financing port infrastructure projects in Africa.

Renewable energy is expected to be a potential area of joint investment interest. The United Arab Emirates has made significant advances in green growth and renewable energy.

The Bank is a major co-financer of the Desert to Power initiative in Africa’s Sahel—a project that will connect 250 million people to electricity, drawing on the region’s abundant solar resources.

With Expo 2020 Dubai concluding this week and drawing visitors from around the world, Adesina will tour the expo and visit the pavilions of the United Arab Emirates, the African Union, and Nigeria.