“This project is a huge initiative that is part of our ambition towards developing a new kind of agriculture.” – Patrick Achi, Prime Minister of Côte d’Ivoire 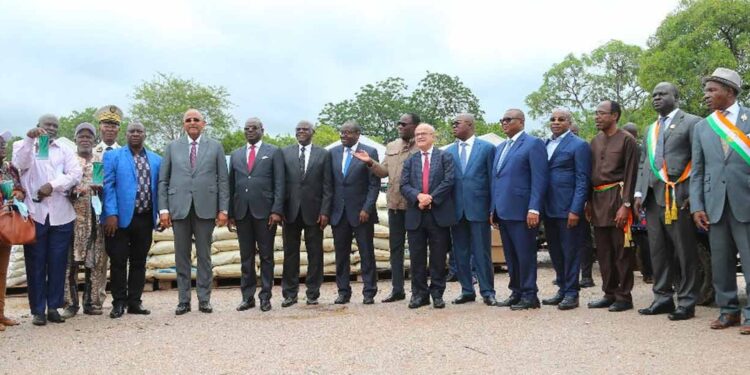 The “kapatchan”, one of the traditional celebratory dances in the Senufo region, attracts women, youngsters, and elderly people, to the foot of the mango trees in the largest orchard in Sinématiali, in northern Côte d’Ivoire. On Wednesday 27 July, the sound of the balafon and the djembe accompanied the swaying hips of dancers from the neighbouring regions of Poro (which include Sinématiali), Bagoué, Tchologo and Hambol.

They arrived in their thousands to take part in the launch of the project to develop a northern agro-industrial hub, which will soon change their lives. “The new agro-industrial hub will be developed here,” said Minister Fidèle Sarassoro Gboroton, chief of staff for Côte d’Ivoire President Alassane Ouattara, who comes from the area. “It’s thanks to the spirit of compromise and selflessness of the people here that they have been able to set aside their interests for the common good.”

“We would like to express the people’s thanks to our partners for their contribution, which will help to improve our agricultural production. The people have asked me to reassure you of their commitment and determination to see the initiative succeed,” the official said.

The site where the event was held will soon host an industrial zone covering 100 hectares. Ivorian Prime Minister Patrick Achi laid the foundation stone for the project, surrounded by several members of his government, along with his Congolese counterpart, Anatole Makosso. Among others present were the African Development Bank, the lead funder of the project, represented by Attiogbevi-Somado Eklou, head of the Agriculture and Agro-Industrial Division for the West Africa region, and the French ambassador to Côte d’Ivoire, Jean-Christophe Belliard.

“Our country is an agricultural powerhouse. We need to continue to strengthen it and drive growth, by producing more and better, and improving processing for better exports,” the Prime Minister said, to resounding applause from those present. “This project is a huge initiative that is part of our ambition towards developing a new kind of agriculture in Côte d’Ivoire.”

“Thanks to the project, we will be able to accelerate and improve agricultural productivity. It will give us the opportunity to create 300 small and medium-sized businesses and support 1,000 young entrepreneurs. It is clear that, if we give the private sector the space it needs, we will build a high-performance agricultural sector,” Achi said. He then expressed his thanks to the African Development Bank Group, which “has agreed to support us in establishing nine agricultural hubs across the country. Developing agriculture in Côte d’Ivoire is about increasing our people’s well-being on a daily basis.”

The project to build a northern agro-industrial hub demonstrates the dynamic nature of the cooperation between the African Development Bank and Côte d’Ivoire, as Attiogbevi-Somado Eklou pointed out: “First and foremost, it is evidence of the African Development Bank Group’s commitment to supporting Côte d’Ivoire’s efforts in transforming its agriculture. We will spare no efforts in supporting you in this project to transform the country’s economy,” he confirmed on behalf of the Bank Group’s president, Akinwumi Adesina.

Marie-Laure Akin-Olugbade, the Bank’s Director General for West Africa, said: “Côte d’Ivoire is a pioneering country in the development of agricultural hub projects, which are now being rolled out in 20 African countries. The northern agro-industrial hub is the second project of its kind, following one in the Bélier region in Yamoussoukro, the capital. In total, there are nine agricultural hubs across the country, whose implementation was entrusted to the Bank in accordance with the national priorities set out in Côte d’Ivoire’s National Agricultural Investment Plan (2018-2025). Obviously, the set-up has taken account of the implementation of its predecessor in Bélier and other similar projects funded by the Bank, including in Nigeria, Togo, and Senegal.

The project will allow Côte d’Ivoire, the world’s leading producer of cocoa and second-largest exporter of cashew nuts, to increase its production of rice, maize, mango, cashews, animal, and fish products. It will strengthen the country’s food and nutritional security, reduce its dependence on food imports and increase its exports of agricultural products.

Among other things, the project includes the creation of a fully serviced central hub – including roads and various utilities, electricity derived from green sources, solar lighting, sanitation, a one-stop shop and waste recycling – that will host major industrial units and associated services (logistics, etc.). Five aggregation and service centres will be built to operate as service, secondary packaging, and primary processing centres for agricultural products.

The project will benefit around half a million people – including 51% women and 60% young people – who will see their revenues increase. But in total, 1.2 million people will benefit indirectly from the project, which will help increase and diversify agricultural products, and create 25,000 direct and 45,000 indirect jobs in the intervention area.