Food, alcohol and tobacco prices rose by 5 percent in March compared to the year prior. In February, the annual inflation rate in this category was 4.2 percent. 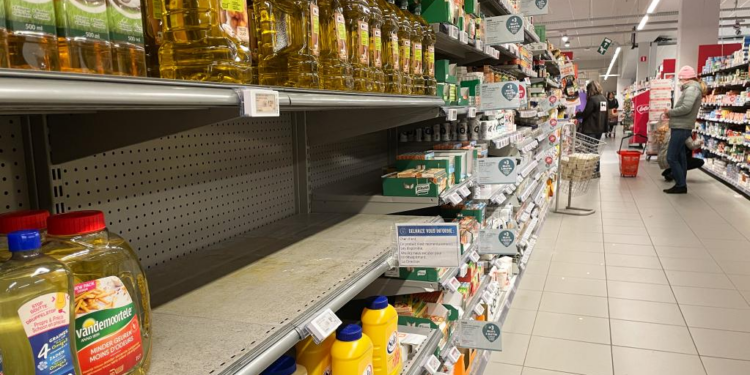 BRUSSELS – The annual inflation in the eurozone accelerated to a record 7.5 percent in March, according to a flash estimate published on Friday by Eurostat, the European Union’s (EU) statistical office.

Inflation has been driven primarily by the 44.7 percent year-on-year hike in energy prices in March. The figure for February was 32 percent.

The prices of services increased by 2.7 percent year-on-year in March (2.5 percent in February).

Uncertainty due to the Russia-Ukraine conflict could push inflation even higher in April, according to Bert Colijn, senior economist for the eurozone at ING. “Even a double-digit inflation print cannot be ruled out at this point,” he said.

Prices are projected to rise further due to the current high energy prices and the ongoing supply chain disruptions, according to Colijn.

Colijn said he did not expect the European Central Bank (ECB) to be able to do much to curb the current pace of inflation since it is mostly due to external factors.

“The ECB is running out of painless options to battle the current economic problems, so we expect it to tread carefully. Without signs of higher wage growth that could point to a wage-price spiral starting or de-anchoring inflation expectations, we expect some normalization of monetary policy in the coming months with an end to quantitative easing in the third quarter and rate hikes in the fourth quarter of 2022 and first quarter of 2023,” Colijn said.