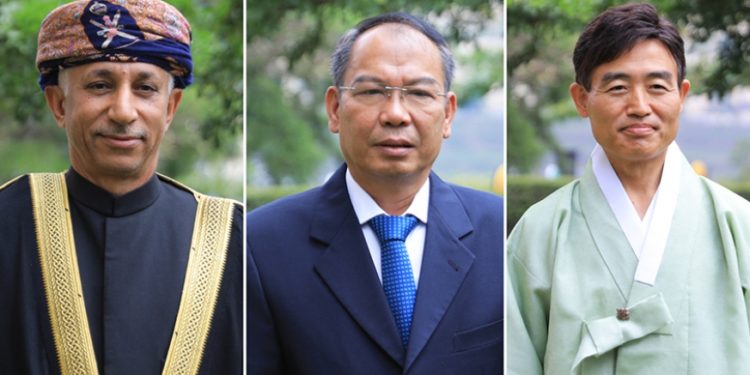 The new envoys are from Oman, South Korea, and Vietnam. Of these, it is only the South Korean envoy who will reside in Kigali, as the ones of Vietnam and Oman will be based in Dar-es-Salaam (Tanzania) and Nairobi (Kenya), respectively.

Speaking to the media after their meeting with the president, the diplomats promised to maintain good relations between their countries and Rwanda.

Saleh Bin Suleiman Bin Ahmed Al-Harthi, the ambassador of Oman to Rwanda said the two countries have a very traditional cooperation, and currently are partnering in education, tourism, oil and mining; and he wants to see sustained relations.

Rwanda and the Sultanate of Oman established diplomatic relations in 1998.

The two countries have a fairly good trade relationship. It is estimated that trade between Rwandan and Oman was valued at $2.3 million in 2018.

Petroleum products represent 82 percent of imports from Oman to Rwanda, while the main products Rwanda exported to Oman in 2018 included vegetables, processed food and cereals.

Ambassador Al-Harthi told the media that Oman is looking forward to seeing Rwandan companies explore opportunities in the country.

“We have a lot of opportunities. We have very large ports and free zone areas, and I would like to extend my invitation to the Rwandan businessmen to come visit Oman to see how we can enhance and level up the corporation,” he said.

Jin-weon Chae, the South Korean ambassador to Rwanda, said that during his tenure he wants to strengthen the close partnership between the two countries and make contribution to Rwanda’s sustainable development.

“I would like to focus on the promotion of development cooperation, economic cooperation and people to people exchange,” he said.

Cooperation between South Korea and Rwanda is mainly focused on areas of education and capacity building, rural development, agriculture, as well as information and communications technology.

On the investment side, the Rwanda Development Board (RDB) registered 9 investments in Rwanda from Korean companies during the period between 2012 and 2020.

Nguyen Nam Tien, Vietnam’s envoy to Rwanda, spoke about how his country and Rwanda can partner for example in supporting each other in international forums like the United Nations.

“Vietnam and Rwanda share interests of peace, stability and unity,” he said.

Rwanda and Vietnam established diplomatic relations in 1957. In 2008, President Kagame visited the Asian country, and 3 deals were inked in areas of agriculture, health, and education.