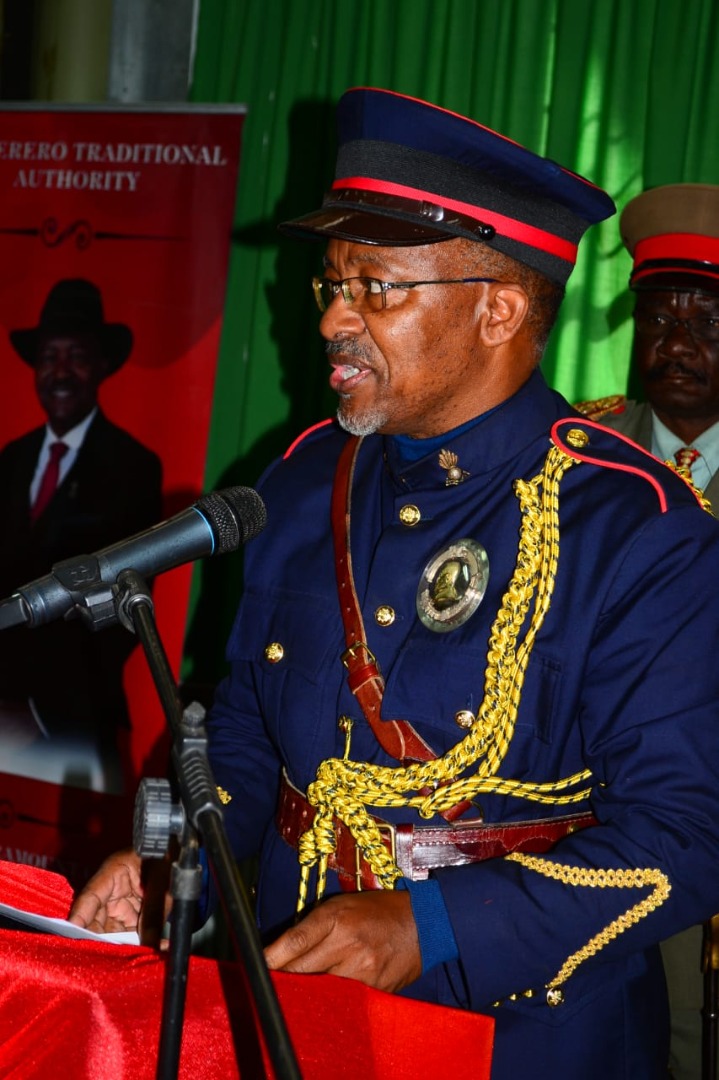 Professor Mutjinde Katjiua takes over from the late paramount Chief Advocate Vekuii Rukoro. During his acceptance speech, he revealed the programmes set for the Ovaherero Traditional Authority that they are grounded in governance, accountability, economic empowerment, stakeholder relations, institutional reform, social welfare, education and restorative justice among others.

Prior to his designation the Professor had faced stiff competition for the chieftaincy of the Ovaherero after chaos had erupted within the leadership of the OvaHerero Traditional Authority with former chairperson Vipuira Kapuuo also wanting a seat at the table. Speaking to his people Mutjinde Katjiua reiterated that the storm was now over and there should be no doubt that he is the legitimate leader.

‘’The Ovaherero Chiefs Council has nominated, designated and elected me following an established process, and then as part of that process has taken me through the established process at specified holy fires to link my being with the ancestors,’

The Paramount Chief then went on to map out a new direction for his people, the Ovaherero –launching a five pillar strategic plan, symbolized by his Right Hand, a plan set for the next three years with emphasis on youth inclusion.

“My Right Hand will define the strategic scope and operational programmes of the OTA during my tenure. Thus, if I raise my Right Hand, I want the Ovaherero people to be reminded and act upon the Strategic Scope represented by each of my fingers as the 5 Pillars of my tenure.“

Here is an annotated description of each Pillar.

THE INDEX FINGER: Wellbeing and Education Education is the basic enabler of socio-economic development of any nation. We will promote and encourage increased enrolment and preference for Science, Technology, Engineering, Mathematics and Vocational Training programmes; while at the same time we will endeavor to empower our communities with skills in the areas that promote and enhance their livelihoods.

THE MIDDLE FINGER: Resilient Livelihoods and Economic Advancement. The OTA will facilitate skills training and capacity development in livestock production and marketing, meat value addition, diversification into horticulture and poultry enterprises. We the Ovaherero are probably Africa’s foremost astute cattle producers. Our cattle production contributes about 5% to the GDP of Namibia.

READ MORE: Namibia: Shifting Africa from the Back seat to the Front seat (Part III)

THE RING FINGER: Genocide and Restorative Justice Our demands for reparation of the Ovaherero and Nama peoples following the genocides committed by Germany on our ancestors, is a human right – we are not begging the German Government for it. It is our right as outlined in the United Nations Declaration on the Rights of Indigenous Peoples, and the principle of Free, Prior and Informed Consent.

We remain committed to work together with our Government and negotiate with the German Government on the issue of genocide, apology and reparation to our communities in Namibia, Botswana, South Africa, Angola, United States of America, Canada, the United Kingdom, Germany and elsewhere. We shall continue to foster and build global alliances with well-meaning individuals and organizations to mount greater pressure on Germany and the Namibian Government, until justice is served.

THE RECONCILIATION AND PEACE FINGER (LITTLE FINGER): Stakeholder Relations and Community Engagement. The Reconciliation and Peace Finger represents our immense capacity and readiness to make peace and reconcile with those we have fought, and with those we have differed in the past. We will seek to do that because the future of our nation is bigger than any battle, war or differences we may have had along the trajectory to future generations.

THE FUTURE BELONGS TO THE YOUTH AND THE MIDDLE AGES

The Paramount Chief concluded by highlighting the importance of youths to governance –further insisting it will be prioritized for the OTA to ensure that due consideration is given to youth and gender equality and participation. He stated he was well aware that youthful leadership will bring in greater innovation in developmental programmes. The paramount chief also credited the participation of women in leadership and ensured better opportunities for sustainable household economic development. To conclude he said

“Our elders’ wisdom will, however, will continue to guide us as we navigate the future”