End hunger: A future where insects make up a substantial portion of the world’s diet is on the horizon.

Animal protein derived from cows, chicken and pig takes up 80 percent of the entire world's farmland, despite only making up less than one-fifth of calories consumed globally. 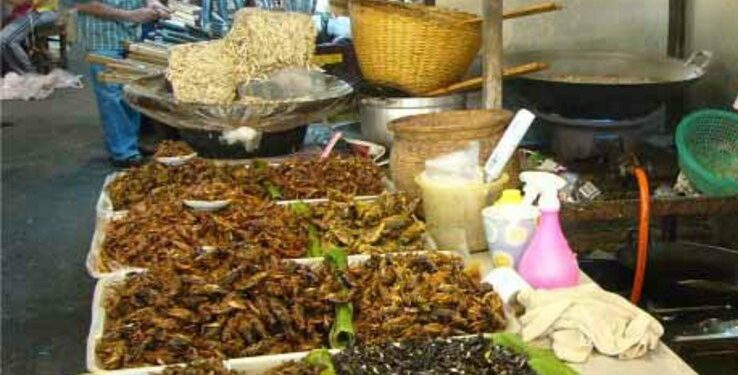 Despite the squeamish nature of such cuisine, insects have been considered a delicacy in some parts of world for centuries. Their low-fat and high-protein nutritious profiles make them a perfect candidate to reduce famine, alongside having a host of environmental benefits.

Animal protein derived from cows, chicken and pig takes up 80 percent of the entire world’s farmland, despite only making up less than one-fifth of calories consumed globally. By freeing up livestock space, huge expanses of land across the world could be returned to native ecosystems, supporting a spectrum of biodiversity as nature intended.

Invertebrates such as grasshoppers, mealworms and crickets are packed full of protein with much higher vitamin levels than pork or beef. They require little space, water and technology to raise compared to large megafauna mammals, which are often pumped full of medication and antibiotics contributing to the global antibiotic resistance crisis. Greenhouse gas emissions through this process are also negligible, with insect waste making excellent fertiliser for agricultural soil.

What seems to be a miracle solution for many issues plaguing the world today is, however, hampered by the challenge of making insects palatable as a cuisine in cultures around the world.

Urban areas of Asia, Europe and North America are most likely to associate insects with dirt instead of as a palatable meal, which is surprising given the popularity of marine invertebrate cuisine. Shrimps, crab and lobsters produce similar visual dishes to crickets and grasshoppers, with their many legs, antennae and small sizes seemingly tolerated. Lobsters are especially prized in Western cooking, a far cry from the dish’s origin of having filthy connotations from being served as a prison food.

How a dish is perceived, from disgusting to gourmet, can change dramatically with time and clever marketing.

Times are changing. The European Union last year declared that mealworms were safe for human consumption, triggering many startups to leap into action, all racing to produce palatable products for a new healthy and green-conscious market.

Cricket protein powder is also surging in popularity, with Canada rapidly becoming the largest market for the commodity. Said to have a mild nutty taste, cricket protein can be sprinkled over porridge or combined to create food textures that do not resemble creepy crawlies for the squeamish.

The sakondry insect from Madagascar, fast becoming a national staple, is said to be so crispy on the outside and meaty on the inside that it closely resembles fried bacon cubes, without the excessive saturated fat.

A future where insects will become invaluable to space exploration is also imminent.

As we explore our solar system, efficient means of producing animal based-proteins will become vital. None are more efficient space-wise than insects, and the colonies of the future could well find themselves tucking into fried crickets with a pint of beer while watching the Martian sunset.