The South African boxing authorities released a statement soon afterwards in which they said that “necessary steps” will be taken against Sediane for his after-the-bell retaliation. 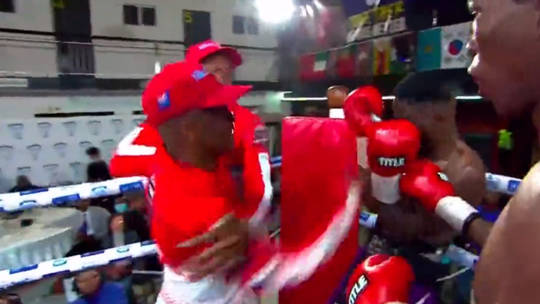 Just when you think you’ve seen everything that can happen in a boxing ring, along comes a clip which proves you wrong – after footage of a furious coach storming the ring in South Africa went viral online.

Michael Sediane, who is understood to be the coach of Sithembiso Maduna, stood up on the ring apron shortly after the culmination of the boxing match and angrily remonstrated with South African featherweight Jeff Magagne.

It is understood that Sediane was enraged by Magagne choosing to celebrate his win by mocking Maduna – an act of bad sportsmanship which apparently sent Sediane over the edge.

After standing toe-to-toe for a moment, Sediane then uncorked a sequence of punches to the shocked Magagne who put up his guard in a bid to deflect the barrage.

The fight was the second meeting between the two rivals, with tensions high ever since Maduna was declared the split decision victor in their initial fight in February of last year to contest the national featherweight crown.

Magagne was clearly happy at the measure of revenge he scored when the final bell rang, flexing his muscles and mean-mugging his opponent after levelling their series at one win apiece.

However, it perhaps wasn’t quite as clear a win as Magagne might have thought as it was revealed as being a majority decision when the judges’ decision was read aloud.

“The act done by Sediane is contrary to [the] spirit espoused by the Boxing Act and Regulations and has brought the sport into disrepute,” Boxing South Africa said.