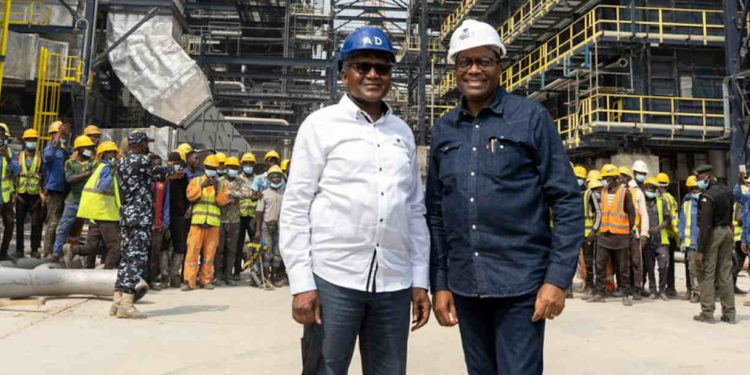 In 2014, the African Development Bank’s board approved a $300 million loan to Dangote Industries Limited to support the construction and operation of the greenfield crude oil refinery and the greenfield fertilizer manufacturing plant. The two facilities are expected to create 38,000 jobs during construction

Adesina said: “The Dangote group is an “Africa growth accelerator … I am completely blown away by the magnitude of what I see here. This is a world-class industrial complex that will make Nigeria and Africa proud. We at the African Development Bank are proud of this project. Every African country needs to have an Aliko Dangote to help the continent industrialize.”

He added: “Dangote’s success demonstrates that governments should prioritize industrialization. We must continue to support the private sector, considering the value they bring.”

The oil refinery and petrochemical plant projects are examples of the African Development Bank’s strategy for fostering industrialization through improved natural resource transformation and exports, as well as support to accelerate indigenous African entrepreneurship.

Adesina said the African private sector was crucial to the execution of the African Continental Free Trade Area.

According to Dangote Group president and chief executive Aliko Dangote, the refinery, which has the capacity to meet 100% of Nigeria’s requirements for refined products with a surplus for export, is the largest single train petroleum refinery in the world, with a capacity to process 650,000 barrels of crude oil per day. It is estimated that by 2023, Nigeria will import zero petroleum oil products – down from approximately $50 billion current oil product imports per year.

The refinery includes a 440-million-liter water treatment tank farm and a housing estate built for 50,000 staff and their families onsite.

Dangote said: “We appreciate the support of the Nigerian government, our lenders, and development finance institutions like the African Development Bank, without whom we would not have come this far. We have enjoyed a good working relationship with the Bank and this visit further encourages us.”

The successful completion of the refinery project is expected to have a significant impact on Nigeria’s foreign exchange through import substitution and substantial savings in earnings. Officials explained that the refinery will be commissioned by the end of the year.

Adesina and Dangote discussed the potential of collaboration between the African Development Bank and Dangote Industries Limited to expand business to other African countries. Possible collaboration could include the establishment of an African industrial manufacturing corps made up of engineers and other technicians who constructed the refinery. Adesina said this would be invaluable for skills sharing across the continent.

Adesina said the African Development Bank would continue to work with the Dangote Group to do more for Africa. He said the Bank’s industrialization strategy included identifying and backing “African regional champions” like the Dangote Group.

He added that the African Bank was willing to assist the Dangote Group in such areas as agriculture – including rice and dairy products – as well as cement expansion into other countries.

Accompanying Adesina on the visit were African Development Bank vice president for Private Sector, Infrastructure, and Industrialization Solomon Adegbie-Quaynor, the Bank’s director general for its Nigeria country office, Lamin Barrow, and the special adviser to the president on industrialization, Professor Banji Oyelaran-Oyeyinka.