We received a total of 1, 400 applications. With this amount of interest shown, we had to change the plans in order to accommodate everyone. 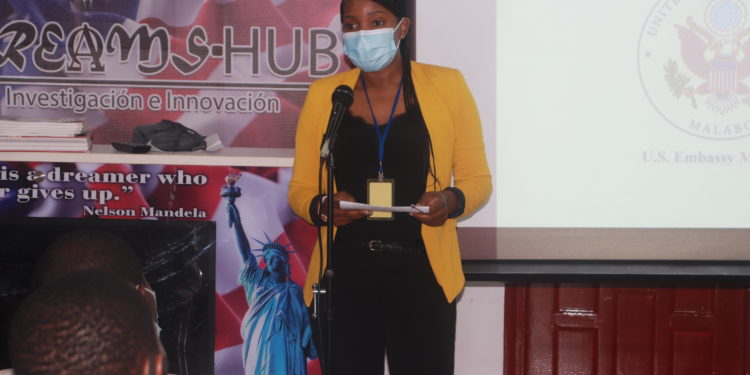 Months after the opening of the new American Space at Dreams Hub Research and Innovation Center, the opening ceremony of the English Language program took place earlier today at the Dreams Hub premises with dignitaries and guests present.

The United States of America Embassy in Malabo, Equatorial Guinea’s delegation was led by Benjamin Garcia, Deputy Chief of Mission.

Following the success of the ceremony, the first set of activities that will be held at the new American Space will be the English Coaching Center. Going with the theme ‘’unlocking new opportunities in English’’, English language classes will be held weekly in different centers across the country.

‘’We had only 500 slots for this term but we received more than 1, 300 applications. There is so much passion to learn English here in Equatorial Guinea and we look forward to continuing this program for years to come,’’ said Benjamin Garcia.

Vanessa Nokonoko, who will oversee the English Coaching Center, welcomed the audience and expressed her satisfaction and spoke of the opportunities for participants.

‘’It gives me great pleasure to announce that the classes will start on Monday, 21st, in Malabo and Bata. In the two months admissions for the classes were publicized, we received a total of 1, 400 applications. With this amount of interest shown, we had to change the plans in order to accommodate everyone. There are children within the ages of 5-15 years also in the program. There will be two levels of this class, with each lasting five months,’’ she said.

Some of the Teachers, who were at the event, were also introduced to the incoming students and guests present. The ceremony also saw a quiz game being played were winners were rewarded with books and other gift items.

The American Space will also serve as a resource center for information and programs highlighting American culture, history and current events, and also play host to seminars, exhibitions, meetings with focus on wide range of American topics.

There will also be a resource of educational materials for interested individuals.

Dreams Hub contributed to this story!