For the first time in the history of the festival, a locally-trained pilot, Jonathan Quaye, was certified to carry passengers in the festival 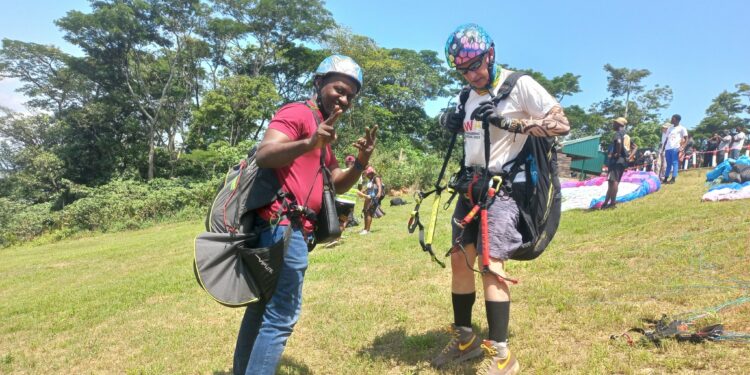 Seasoned pilots from around the world have since Thursday, when the festival opened, flown hundreds of revellers from the paragliding field on the peak of the Odweanoma mountain at Atibie into the plains of Nkawkaw.

The revellers, both locals and foreigners some of who flew into the country purposely for the festival, paid GH₵550 for the experience which includes landing on the pitch of the Nkawkaw Sports Stadium which is about the most low-lying spot in Kwahu.

The Deputy Head of Corporate Affairs at the Ghana Tourism Authority (GTA), Kofi Atta Kakra Kusi, said it has been a priority of successive governments to make the paragliding festival a major event on the national tourism calendar.

He said the outbreak of the COVID-19 pandemic forced the GTA to break the paragliding festival because there was economic hardship and travel restrictions around the world.

He said the lifting of the restrictions had naturally revived the enthusiasm of revellers in the festival, and that had also pushed the GTA to organise it this year.

This year, he said the patronage had been enormous such that in the first two days about 120 people had flown tandem flights with a pilot.

“It has been an exciting experience for revellers and all of us,” he said.

For the first time in the history of the festival, he said a locally-trained pilot, Jonathan Quaye, who can carry passengers has been certified to participate in the festival.