Nairobi: Leaders of Sudan, Ethiopia agree to focus on peace

The meeting happened on the sidelines of the 39th Intergovernmental Authority on Development's Extraordinary Summit of the Assembly of Heads of State and Government held in Nairobi, Kenya. 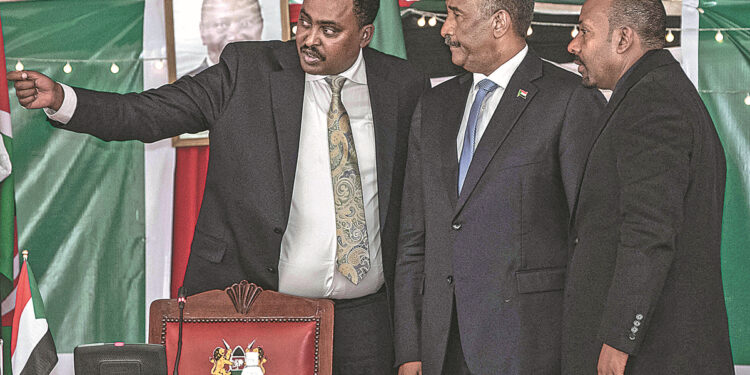 Ethiopia’s Prime Minister Abiy Ahmed and Chairman of Sudan’s Transitional Sovereign Council Abdel Fattah al-Burhan reached consensus on Tuesday for peaceful resolution to disagreements, after the two leaders met for the first time since the two countries’ falling-out over a border conflict that began a few weeks ago.

After the meeting, Ahmed took to Twitter to announce that the two countries had reached consensus that their people have plenty of shared aspirations in life and need to work on peacefully achieving them.

“In my discussions with Abdel Fattah al-Burhan, we have both agreed that our two countries have plenty of collaborative elements to work on peacefully. Our common bonds surpass any divisions. We both made a commitment for dialogue and peaceful resolution to outstanding issues,” Ahmed said.

Burhan said the meeting gave them an opportunity to take stock of the response to challenges in the region, adding that Sudan is happy to convene in a very short time to discuss the matter.

Talks between the two leaders follow fighting in a volatile border region last month, in which Sudan said Ethiopian forces had captured and killed Sudanese troops, a claim which was denied by Ethiopia.

The meeting focused on peace and security in the East African region with focuses on conflict, terrorism and violent extremism, the proliferation of illicit arms, illegal migration and human trafficking.

Burhan, who chaired the meeting, said it comes at a crucial time when the region is besieged by a wide spectrum of challenges and threats both internally and externally.

“Peace and security are the bedrock of prosperity, development and regional integration. Therefore, conflicts are the single biggest threat to our success as states and societies,” Burhan said.

Uhuru Kenyatta, Kenya’s president and the meeting’s host, called on IGAD heads of state and government to work toward sustainable solutions to address regional peace and security. Kenyatta cited violent extremism, drought and armed conflicts as some of the challenges that require urgent attention.

“In the past two years alone, the region has experienced a desert locust invasion, a crushing drought that is still ongoing, numerous threats related to violent extremism, armed conflicts and, like the rest of the world, the region has not been spared from the COVID-19 pandemic,” Kenyatta said.

READ MORE: End hunger: A future where insects make up a substantial portion of the world’s diet is on the horizon.

“The drought－the worst in 40 years－has intensified food insecurity, dried up water sources, and forced displacement of people, raising tensions that could trigger new conflicts. We urgently need to manage the drought before it becomes a threat multiplier,” he added.