Nairobi: UN agency reaches out to women in Kenya

Over 10,000 women, girls and boys affected by coronavirus and other emergencies like the recent floods in urban and rural locations, have benefitted from the intervention. 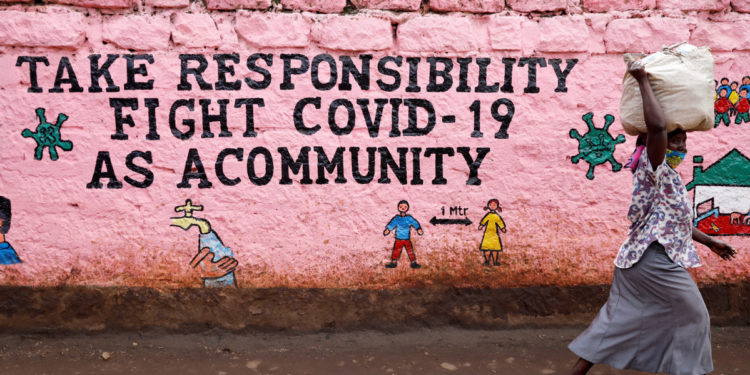 Women and girls are the hardest hit by the social and economic impacts of the coronavirus pandemic, further deepening their preexisting vulnerabilities as a result of discrimination and marginalization, according to the United Nations.

In addition to losing jobs and businesses, some women are now giving birth in situations that put their lives at risk either because they fear going to hospitals where they can contract the virus or they lack money to access better healthcare services.

Mirriam Mbithe, a resident of Kenya’s capital Nairobi, narrated how her niece almost lost her life while giving birth in July.

The 25-year-old decided to deliver in a nearby clinic where the cost would be low because she had lost her job. Unfortunately, she wasn’t given proper treatment, leading to excessive bleeding.

“I received a call very early in the morning that my niece was in a coma due to loss of blood. I rushed to the clinic where we made quick arrangements and transferred her to a public hospital and thankfully her life was saved,” Mbithe said.

She said her niece couldn’t afford paying for her health insurance, which she had planned to use during her delivery in her hospital of choice after losing job in March.

In addition to maternal health, women are also suffering from gender-based violence, girls being exposed to unwanted pregnancies due to closure of schools, and many from poor families unable to afford sanitary wear.

According to the United Nations Population Fund, an estimated 1.2 million women and girls in Kenya who fall within the reproductive age are in dire need of sanitary wear.

This would cost approximately $48 million, the UN agency said, adding that the gap in meeting the need is a critical factor in predicting the fate of women and girls as the world fights the coronavirus.

Kenya is already facing a teen pregnancy crisis following the closure of schools, and the situation is likely to worsen where schools reopen. By June, the country had recorded a total of close to 4,000 pregnancies among school girls.

To partly resolve the challenges facing women and girls, the UN agency has collaborated with Kenyan officials for gender and humanitarian organizations like the Kenya Red Cross Society to alleviate the plight of women and girls through provision of dignity kits.

A typical dignity kit consists of soap, sanitary pads, panties, a wrapper, slippers, body oil, a tooth brush and tooth paste, a comb, a torch and a bag. To make the kits coronavirus responsive, the UN Population Fund has included masks and sanitizers in the contents.

In addition to women and girls, boys and vulnerable men receive dignity kits specific to their needs.

Through a partnership and collaboration with This-Ability, an organization that advocates for the rights and well-being of women and girls with disabilities, the UN agency distributed 200 dignity kits in July to the vulnerable group.

Ademola Olajide, the country representative of the UN population Fund, said in these difficult times, families, especially those in the informal settlements, may have had to make tough choices with regard to their priorities and expenditures, which excludes the hygiene needs of women and girls.

“Periods do not end in pandemics and human dignity is not suspended. We have today partnered with the government in providing the dignity kits to our girls in the informal communities to cushion them in this difficult time,” Olajide said.