The Africa COVID-19 Response Fund is a financial instrument to mobilize and manage funds from the private sector in Africa, and other well-wishers with the support of several African banks. 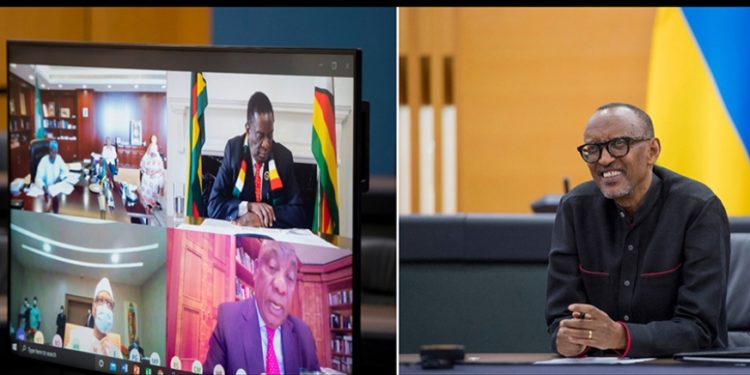 President Kagame and other leaders during the Heads of State meeting held on Wednesday by videoconference.

The Fund will operate under the supervision of the African Union through its public health institution Africa CDC, which will determine priority interventions and actions.

The priority actions of the fund include the purchase and distribution of key equipment for diagnosis, treatment and protection of caregivers.

The virtual meeting was also aimed at ensuring that the continent is in position to mobilize the needed resources to support businesses in the face of the pandemic as well as protect human development gains of citizens.

President Kagame said that among the ways to build resilience in the face of the global resilience is commencing the Intra-Africa Trade as stipulated in the Continental Free Trade Area in July.

This he said, would increase trade and production at a time when there has been disruption of trade globally.

“We must not lose sight of the start of the critical importance of trading under the Continental Free Trade Area in July. This has always been a major priority for our union, but the current disruptions to international trade make it even more important at this particular moment to increase trade and production in our continent,” he said.

The commencement of Intra-Africa trade under the framework will among other things maintain trade and production on the continent as there will be a ready market across the continent at a time when the global supply chains have been halted.

Medics and some of the first four patients who were discharged from Kanyinya Health Centre in Nyarugenge District on April 5 after recovering from COVID-19. Photo: Hudson Kuteesa.

This will allow countries across the continent to access essential supplies and food items which were previously sourced in external markets.

Kagame said the continent’s coordinated engagement with the G20, internally and other development partners was bearing fruits and called for continued collaboration in the coming months.

The continent’s coordination has among other things seen financial partners such as the International Monetary Fund offer an immediate debt service relief to allow countries to use the liquidity to deal with the pandemic’s effects.

The President commended the AU Chairperson for appointing special envoys to mobilize international support for Africa’s efforts to address the economic challenges African countries will face as a result of the COVID-19 pandemic.