Six people have been killed and 219 arrested amid escalating violence during rioting that broke out following the imprisonment of South Africa's former president Jacob Zuma, police said on Monday. 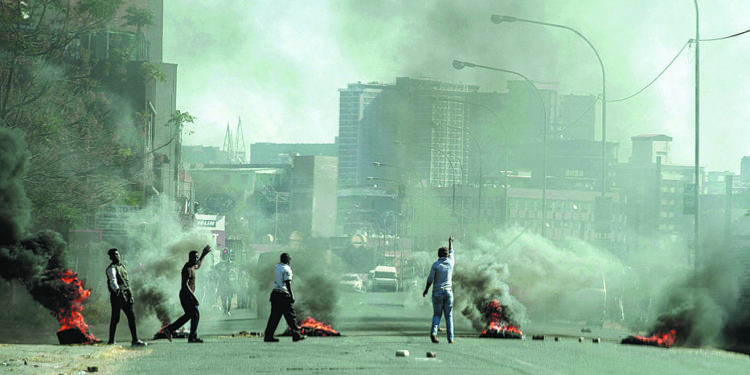 Police said shops and businesses have been looted and vandalized. Traffic has been disrupted by rioters barricading major roads with burning tires and trucks, while cars have been attacked.

The unrest erupted shortly after Zuma started serving a 15-month sentence for contempt of court on Wednesday night.

The rioting started in Zuma’s home region of KwaZulu-Natal province last week and over the weekend it spread to Gauteng province, which includes Johannesburg, South Africa’s largest city.

KwaZulu-Natal was hit hard by protests over the weekend, and on Monday flames could be seen coming from the roof of a shopping center in the provincial capital Pietermaritzburg as hordes of people rushed in to loot.

The deaths－four in Gauteng and two in KwaZulu-Natal－appear to have been caused by the chaos and police are investigating, said police Colonel Brenda Muridili. The police and national security forces have expanded their presence in both provinces to help quell the violence, said the statement. The extent of damage to property and businesses will be determined at a later stage, said police.

Zuma has been imprisoned for defying a court order to testify before a state-backed inquiry probing allegations of corruption during his term as president from 2009 to 2018.His bid to be released from the Estcourt Correctional Center was rejected by a regional court on Friday. He was set to make another attempt on Monday with the Constitutional Court, the country’s highest court.

The country’s power utility Eskom said on Sunday it suspended service calls in areas affected by protests, citing concerns for the safety of its employees and contractors.

Although some of the protests appear to have been triggered by Zuma’s detention, they are tied in with a sense of economic distress as the country faces tightened restrictions under a third wave of the COVID-19 pandemic.

“We don’t know yet what the strike is all about, … but from what people have been saying it’s something related to our former president,” resident Sphamandla Ndlazi said in the Jeppe neighborhood of Johannesburg.

President Cyril Ramaphosa reiterated calls for calm on Sunday in a speech focused on COVID-19 restrictions, urging people to express themselves “in peaceful protest” and avoid acts that endanger lives and damage the economy.