The movement also coincides with the Union Resolve 2022 joint exercises being conducted by the armed forces of Russia and Belarus. 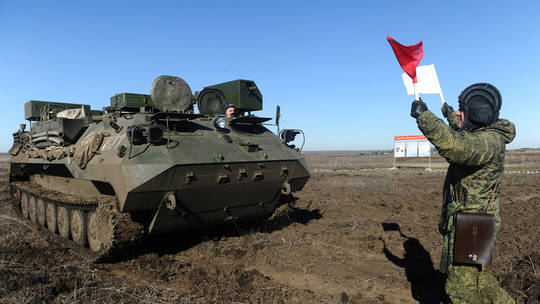 The Russian Army has deployed a new electronic warfare battalion in the Belgorod Region, close to the border with Ukraine, which will “reduce the time needed to obtain necessary information [about military movements],” it was revealed on Tuesday.

Announced by the Western Military District, one of Russia’s five Army administrative divisions, the new battalion is armed with multiple different vehicles designed for electronic warfare, such as the Borisoglebsk 2, designed to disrupt communications and GPS systems, and the Zhitel portable communications jamming station.

“A separate electronic warfare battalion has joined the Vistula Motorized Rifle Division of the Western Military District. The new military units are deployed in the Belgorod region,” an official press release stated.

According to Colonel General Alexander Zhuravlev, the battalion “will significantly increase reconnaissance capabilities of the unit.”

READ MORE: The families of US diplomats have been ordered to leave Ukraine

Aside from his work commanding the Western Military District, Zhuravlev is known for leading Russian forces in Syria during the civil war there.

The Belgorod Region, where the electronic warfare battalion has been placed, borders Ukraine. Kharkiv, that country’s second-largest city, is less than an hour away from the frontier. The new deployment comes as Russia stands accused of planning an invasion of Ukraine, with Western newspapers and politicians suggesting a military incursion is around the corner. The Kremlin has repeatedly denied this accusation, stating that Russia is simply moving its own military around its own territory.

The movement also coincides with the Union Resolve 2022 joint exercises being conducted by the armed forces of Russia and Belarus. Troops from around Russia are currently redeploying to the country’s western ally, ahead of large-scale joint drills, due to begin on February 10. The US State Department has suggested that the exercises could be a pretense for an invasion of Ukraine.