Polio can be contracted through drinking water that is contaminated with the feces of someone who carries the virus. 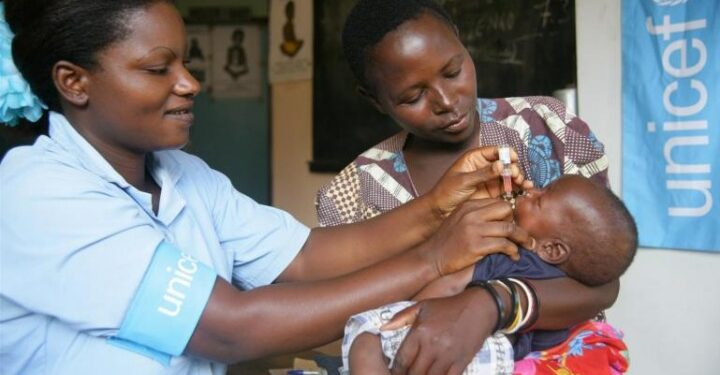 In efforts to curb the spread of polio after an outbreak in Malawi, the United Nations Children’s Fund, partners and respective governments have launched a vaccination campaign targeting the southeastern African country and its neighbors Mozambique, Tanzania and Zambia.

In the first round of the mass vaccination campaign which began on Sunday, more than 9 million children under the age of 5 will be vaccinated against the disabling and life-threatening disease in the four countries.

UNICEF said it has procured more than 36 million doses of polio vaccine for the first two rounds.

The vaccination campaign follows after Malawi reported a confirmed case of Type 1 wild poliovirus in a 3-year-old girl in the capital Lilongwe on Feb 17. The confirmation caused alarm because it was the first detection of a polio case in Africa since 2016 and also after the continent was declared free of indigenous wild polio in August 2020.

Additionally, detection of a case outside the world’s two remaining endemic countries, Pakistan and Afghanistan, represented an emergency that requires effective response to prevent its spread, according to the World Health Organization.

Genetic sequencing of the Malawi case linked the virus to a strain circulating in Pakistan’s Sindh province in 2019, indicating that it was an imported virus.

Polio is a viral disease with no cure. It invades the nervous system and can cause irreversible paralysis mainly in children and teenagers up to 15 years of age. It also has the potential to infect immunocompromised adults.

“UNICEF is working closely with governments and partners to do everything possible to stop the virus in its tracks,” said Mohamed Fall, the agency’s regional director for eastern and southern Africa, in a statement on Sunday.

Polio can be contracted through drinking water that is contaminated with the feces of someone who carries the virus. Children under the age of 5 and those living in areas with poor sanitation are most at risk.

“A regional response is vital as polio is extremely contagious and can spread easily as people move across borders,” Fall said.

“There is no cure for polio, but the vaccine protects children for life. We are working with the World Health Organization and other partners to make sure parents, as well as community and religious leaders, know how important it is that every child receives their vaccine.”

Matshidiso Moeti, the WHO’s regional director for Africa, said on Friday that more than 80 million doses of the bivalent oral polio vaccine will be administered in the four-round vaccination drive.

The WHO said the polio vaccination campaign is aimed at reaching children who are either not immunized or only partially protected, and to boost immunity in those who have been immunized.

Data published by the WHO and UNICEF in July indicated that around 7.7 million African children missed out on vital first doses of Diphtheria-Tetanus-Pertussis, measles and polio vaccines in 2020 due to disruptions to health services caused by the COVID-19 pandemic.