The poorest countries will bear the worst effects of climate change and the highest costs in terms of economic production and higher mortality, according to Nobel laureate Esther Duflo. 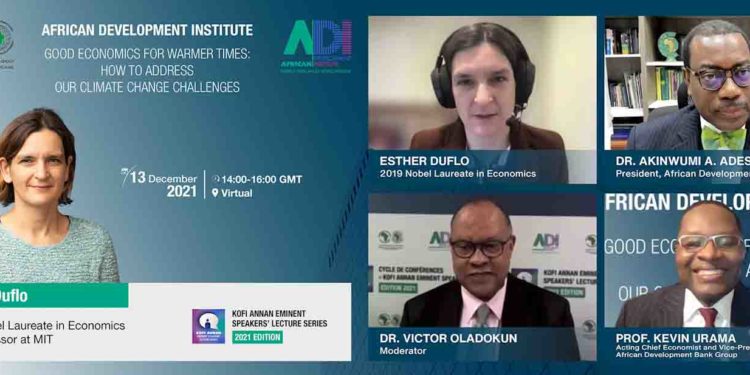 The 2019 Economics Nobel Laureate and professor of economics at the Massachusetts Institute of Technology (MIT), delivered the keynote at the African Development Bank’s 2021 Kofi Annan Eminent Speaker Lecture Series.

In her address titled Good Economics for Warmer Times – how to address our climate change challenge, Professor Duflo said the imbalance between wealthy and poor countries followed the ‘10-50 rule’ – “Ten percent of the highest polluters are responsible for about 50% of global emissions, and 50% of the bottom emitters are responsible for 13% of global emissions. She attributed the disparity in part to the reluctance of wealthy countries to forcefully commit to tackling climate change.

The Nobel laureate said the IMF had made an estimate of $50 billion as the cost package for Covax to help most of the countries of the world vaccinate up to 60% of their population within two years. The estimated potential benefit, she said, was $9 trillion, which she added was an obvious win-win.

She said global efforts to tackle Covid-19 pandemic had dampened her optimism about the global responses to climate change.

Professor Duflo urged immediate action but warned that the world cannot rely on innovation alone. “The impact of purely technological solutions is often very disappointing in real life,” she stressed.

According to the Nobel laureate globally combating climate change will require changes in behavior and consumption patterns. She noted that economists underestimate the capacity of humans to change behaviors, and that shifts in consumption would need to be made primarily in industrialized countries. “I don’t think we can tell Africans with a straight face that they need to consume less when they in fact need to consume more,” she said.

The Bank’s Acting Chief Economist and Vice President Kevin C. Urama said the topic could not be timelier, coming right after the COP26 global climate conference in Glasgow last month.

The Nobel laureate’s lecture was followed by a conversation with African Development Bank President Dr. Akinwumi A. Adesina, who praised her pragmatic economic research and the insights she provided.

He said Professor Duflo’s remarks underscored the need to change the way we measure wealth creation. “GDP tells us very little about how wealth is produced,” Dr Adesina said.  “I have been a big advocate of the need to weigh the GDP of countries by the extent of negative externalities they create.”

Dr Adesina engaged in an extensive discussion with Professor Duflo about the importance of accurate carbon pricing as an incentive to developing nations He proposed the establishment of a long-term carbon sink fund to compensate countries like Gabon and the Democratic Republic of Congo for preserving vast forests that sequester carbon dioxide. He noted that the debt-to-GDP ratios of such countries would substantively be lower if their forests were taken into consideration.

Professor Duflo said there was a crisis of credibility and trust for governments whose actions were not aligned with their commitments and that change would require a global enforcement of regulations. According to Duflo, “Nature is stronger than us and dire warnings do come to pass,” hence the need for collective action.

The Kofi A Annan Lecture Series has covered a range of African and global development topics. They include economics, finance, regional integration, human development and the environment. The lectures have been a forum for eminent persons to share policy insights on development challenges in Africa