Harare mayor Herbert Gomba on Sunday ordered a halt to the demolition of informal market stalls following a public outcry. 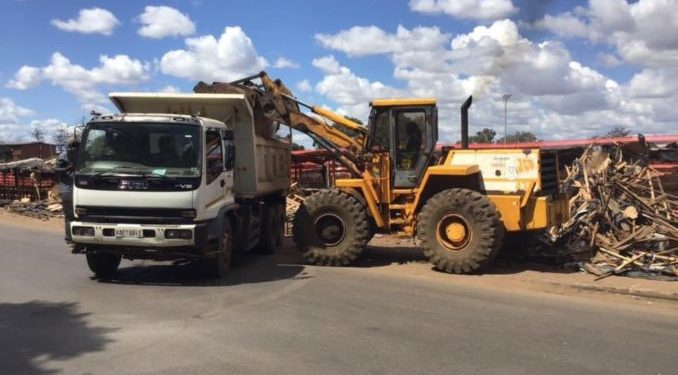 The City of Harare and the government have used the cover of the coronavirus lockdown to tear down illegal market stalls in poor neighbourhoods.

Council officials, with the help of police and soldiers, were on Saturday and Sunday demolishing makeshift stalls used by informal traders in Mbare and Highfield.

The move was strongly criticised by citizens in the country where more than 80 percent of the working population have no formal jobs and eke a living from informal markets.

“Today, at 7.29PM I made a call to the town clerk of the City of Harare Hosea Abraham Chisango asking him to implore the government, the municipal police and any other stakeholders to stop the current wave of demolitions in and around the capital city,” Gomba said in a statement late Sunday.

He said he had also directed a council committee that deals with informal traders to consult the various interest groups and present a “comprehensive policy that addresses the issue of space barons, revenue collection, registration of vendors, introduction of technology in the sector and the refurbishment of municipal markets.”

City authorities had earlier defended the demolitions saying they were necessary to restore order in the city, and that informal traders would be relocated to new and better facilities.

The action was triggered by the local government ministry which, in an April 8 letter to the MDC-run council, said a Cabinet resolution had directed that local authorities must use the relative quiet of the lockdown to “clean up and renovate small and medium enterprise and informal traders’ workspaces so that these areas will be more conducive to operate from when business reopens.”

City of Harare spokesman Michael Chideme said: “The people who were trading on this site (Mbare Magaba) will be put in a new complex, so on Monday our teams will be working on the new complex, flattening out, pouring concrete and then marking the vending bays.

“The overflow from this market, will be absorbed at the market under construction at Coca-Cola. You will also realise that we have people who are selling here who had abandoned the Mupedzanhamo market and some who had abandoned the other markets at Mbare Musika. They will go back to their original vending sites.”

In a statement on Sunday, the Zimbabwe Congress of Trade Unions (ZCTU) accused authorities of carrying out a “thuggish act that is insensitive to the plight of the poor.”

“Only stupidity can lead a council or government to demolish sources of livelihoods without a plan on how to feed the nation during the lockdown and post Covid-19,” the ZCTU blasted.

President Emmerson Mnangagwa on Sunday extended a lockdown to contain the spread of the new coronavirus by two weeks.

Mnangagwa said the lockdown would continue because the country had not yet met conditions set down by the World Health Organisation to lift the measures.

Zimbabwe began a 21-day lockdown on March 30, which has confined most people to their homes. But in poor townships, people are venturing out in search of staples like maize meal, leading to long queues at the shops.

The lockdown has left many citizens without an income and food at a time the country is grappling with the worst economic crisis in a decade, marked by shortages of foreign exchange, food and medicines.