The minister called on the Indian businesspeople to seize the business opportunities Angola can offer and invest in various such fields as agriculture, industry, agro-industry, mineral resources and many others. 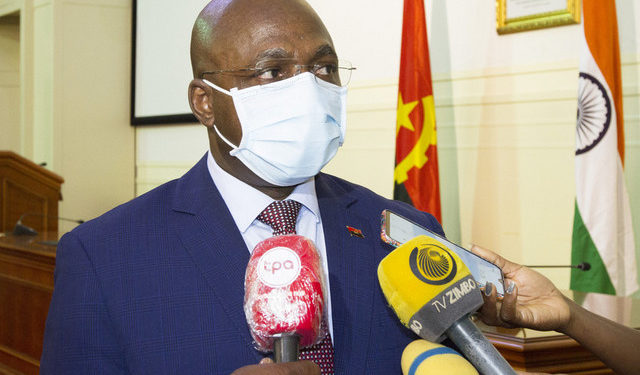 Speaking at the end of the first Angola-India Joint Bilateral Commission video-conference, Téte António told journalists the event shows the importance the governments of both countries attach to the good relations of friendship and cooperation.

“It is with a great honour that, on behalf of the government of the Republic of Angola, we participate in the first Angola-India Joint Bilateral Commission meeting, heading a delegation comprising prominent fellow members of Angola’s executive, as well as representatives of various other ministerial departments,” said the minister.

The Foreign minister on the occasion quoted President João Lourenço during his inauguration address when he mentioned India as one of Angola’s most relevant and privileged partners in various spheres like education, health, agriculture and livestock, science, technologies and several others.

He said he believes the virtual meeting will contribute to reinforce and consolidate cooperation in the political, diplomatic, economic, commercial and cultural spheres, and lay the bases for a strategic cooperation between the two countries.

Téte António spoke of the need for the parties to continue working hard towards creating and putting in place cooperation mechanisms that secure the signing of cooperation accords in various fields like health, visa suppression on diplomatic and service passports and others.

Angola and India envisage the growth of trade and investment that recorded a boost after the meeting between President João Lourenço and Prime-minister Narenda Modi, in July 2018, on the fringes of the BRICS summit.

India has been providing post-graduation scholarships for Angolan students, as part of its technical and economic cooperation programme.

The relations between Angola and India date back to 1761, when some regions of the Asian nation (Goa Damão and Dio) were, alike Angola, considered Portuguese territories. The two countries established diplomatic relations on 2 July 1979.