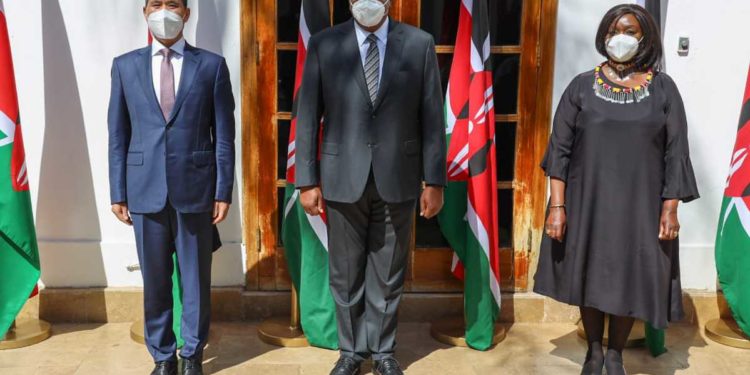 Kenya President Uhuru Kenyatta received credentials from six envoys recently posted to Kenya, including Ambassador Zhou Pingjian from China, on Wednesday at the State House in Nairobi. Kenyatta welcomed the new envoys and wished them a successful tour of duty in Kenya and restated the country’s strong commitment to multilateralism. He further challenged the new envoys to work towards deepening existing strong bilateral ties between Kenya and their respective countries.

Pingjian’s appointment is a move from his role as ambassador to Nigeria. Besides taking on the role of ambassador to Kenya, Zhou also will be China’s permanent representative to the United Nations Environment Program and will serve as Beijing’s envoy at UN-Habitat, an agency that works for environmentally sustainable urban development.

Zhou’s predecessor in Kenya, Wu Peng, has been promoted to the role of director-general of the Department of African Affairs in China’s Ministry of Foreign Affairs.

Among the other envoys who presented their credentials to Kenyatta were Ambassadors Valentin Zellweger of Switzerland, Ole Thonke of Denmark, Marten Brouwer of the Netherlands, Stephen Simbachawene of Tanzania and Caroline Vicini of Sweden.