Dion Ngute during his arrival called for return to normalcy in the two English-speaking regions where armed conflict has been raging for five years now. 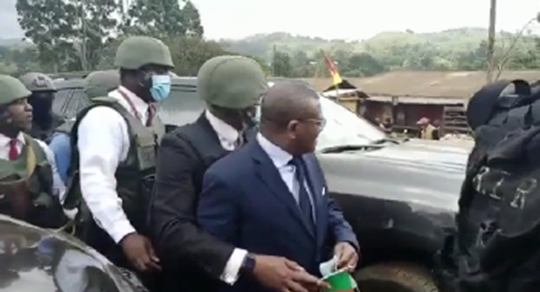 The convoy of Cameroon’s Prime Minister and Head of Government Chief Dr Joseph Dion Ngute Tuesday October 5, 2021, came under attack from members of non-state armed groups operation in the two restive North West and South West regions of the country.

The Prime Minister was attacked on a four-day peace mission to the troubled North West region where armed gangs weeks back killed fifteen elements of the Rapid Intervention Battalion, BIR, Cameroon’s elite force.

In a locality known as Matazen, bordering the region and the neighbouring West region, the PM had stopped to commune with the population of the area and the elite of the region who had gathered to receive him.

While addressing the crowd, gunshots were fired from nearby bushes. Elements of the armed forces that made of the long convoy replied the attack in a stiff manner. The deafening sounds of gunshots interrupted the Prime Minister’s address to the population at the road.

Panic-stricken as he was and other ministers and elite who had massively turned out to the area, the PM was rushed to his vehicle as caught of viral social media videos by armed-to-the-teeth soldiers.The gunshots created a lot of commotion. Normalcy was returned about 15 minutes when soldiers successfully pushed back the gunmen.

The scenario in the North West, it should be said, isn’t the first. Separatist fighters are noted for attempting to create disruptions during visits of officials so as to get social media praises from their sponsors.

In 2020, during the Mount Cameroon Race in Buea in the South West region, same few shots were fired at the convoy that was escorting the equipment and personnel of the state-owned broadcaster, the CRTV to the region, around the Mile 14 area.

The convoy of the PM would then proceed after the attack to Bamenda where he was given an enthusiastic welcome. The streets of BemendaUp Station was full with inhabitants of the city drawn from all background. The mammoth crowd of cheering residents sang songs of peace to receive the man they so love and consider a father.

Dion Ngute during his arrival called for return to normalcy in the two English-speaking regions where armed conflict has been raging for five years now. The crisis started following complaints from Cameroon’s Anglophone lawyers and teachers. It later morphed into an armed conflict.

“It is time to let those who are making life difficult for us and for themselves to know that it is time to open a new chapter. Let us come back together as one people. Let us enjoy this Bamenda like we used to do in those days and like I see some of us already enjoying today. I thank you all for this show of solidarity. I came here with a delegation of your brothers and sisters who have only one agenda, which is to make the North West what it used to be,” the Head of Government told Bamenda residents.

Dion will during the stay in the North West region grant audiences to all the elite and receive all the segments of the population from all seven divisions so as to listen get the reality of the crisis in their area and get proposals on how normalcy could return.