Malawi elections: Presidency not a preserve of two families—Chilima

Speaking during a whistle-stop tour of Ntcheu District yesterday, Chilima said time has come for Malawians to say no to the trap set by the Muluzi and Mutharika families as regards the country’s presidency 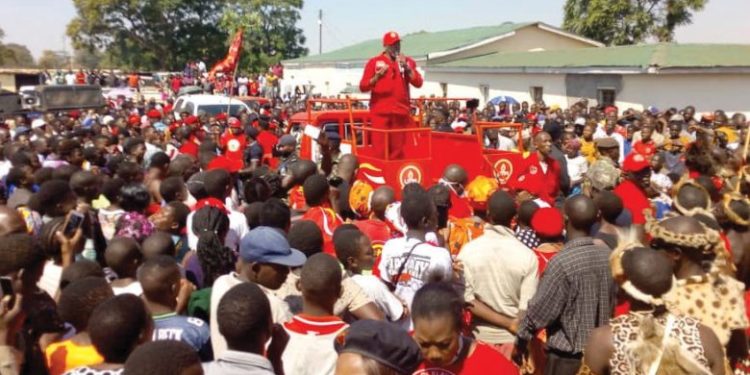 Two weeks into the campaign period for the court ordered fresh presidential election, Tonse Alliance running mate and UTM president Saulos Chilima, who is also the country’s Vice President, has emphasised that Malawi is not an estate for two families.

“We should not let two families to take turns in reaping us off. What they are doing is that they want to play around with Malawians.

“They are not the only families with the capabilities of developing Malawi. Why should Malawians give them another five years to reap us of?” Chilima said.

He claimed the two families, which have ruled Malawi since 1994, would like to make Malawians believe that they are the only families with a monopoly of wisdom.

He noted that Tonse Alliance, led by Malawi Congress Party president Lazarus Chakwera, is the only team that offers hope to Malawians.

According to Chilima, Malawians are looking for real development such as jobs, cheap fertilizer, quality roads, quality education, quality health care, food security, potable water and many other things.

“The people of Mozambique were once at war for about 14 years. We kept them here in Malawi for some years. Now they have gone back and are now miles ahead of us because of good leadership.

“If we look at Malawi, we are almost at the same place, even many steps backwards.What crime have we committed? It’s all because some two families have pulled ilus backwards,” Chilima said.

Speaking at Tsangano Trading Centre, the Vice President urged people to vote for leaders of their choice, regardless of where they come from.

“Who said presidents can only come from the Southern Region? We need to do away with divisive politics…I urge you to vote for Dr Lazarus Chakwera in the forthcoming presidential election,” he said.

He said Tonse Alliance will bring factories in Malawi, especially in districts such as Ntcheu.

“We have plenty of fruits here, we should be producing juice or tomato sauce,” Chilima said.

He stressed that people in the country have a golden opportunity to bring in a government that will give them jobs, and that Tonse Alliance will bring that reality.

He said Malawi needs a uniting force which could break the chains of nepotism that have divided the country.

Taking her turn, UTM Secretary General, Patricia Kaliati, said the people of Ntcheu have been taken for granted for a long time.

During the whistle-stop tour, UTM received new members who have defected from DPP and UDF.