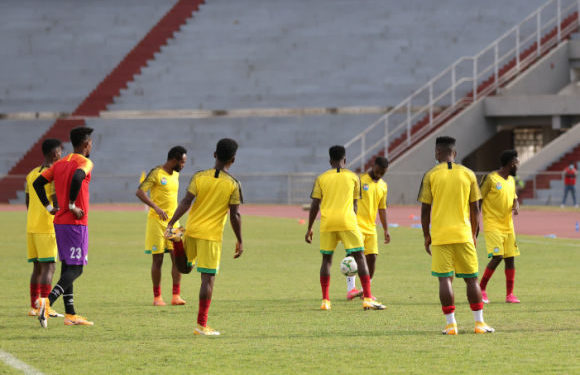 Ethiopian players warm up during the 2021 African Cup of Nations Qualifier football match between Ethiopia and Madagascar held at the Bahir Dar Stadium in Bahir Dar, Ethiopia on 24 March 2021 ©BackpagePix

The match is scheduled to be played at the Stade Olympique Alassane Ouattara in is the economic capital of Ivory Coast, Abidjan.

The Elephants thrashed Niger’s Menas 3-0 in a Group K match which was played in the biggest Nigerien city, Niamey on March 26.

The win saw Group K leaders, Ivory Coast book their spot in next year’s tournament which will be hosted by Cameroon.

The Elephants will now be looking to defeat Ethiopia’s Walia Ibex and finish at the top of their qualifying group.

Meanwhile, Ethiopia hammered Madagascar 4-0 in a Group K match which was played in the Ethiopian city of Bahir Dar on March 24.

The Walia Ibex are placed second on the group standings – a point behind leaders Ivory Coast with one game left.

The previous match between Ivory Coast and Ethiopia was on 19 November 2019.

Ethiopia stunned Ivory Coast as they claimed a 2-1 win in the 2022 AFCON qualifier Group K game at the Bahir Dar Stadium in the Ethiopian city of Bahir Dar.