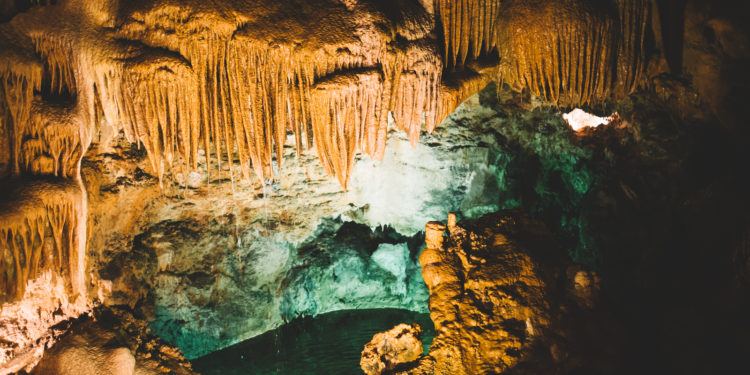 The Cango Caves, A series of hidden chambers carved by ancient water eroding the Precambrian limestone of the Swartberg Mountains, the caves are the biggest show cave system in Africa. They are also the most visited caves in the South Africa. Together with the ostrich farms of nearby Oudtshoorn, they are one of the main attractions for visitors to this arid region of the country.

History of the Cango Caves

Although the limestone from which the caves are carved is around 750 million years old, the caves themselves were formed roughly 20 million years ago. As rainwater seeped through fissures in the porous rock, it collected into underground lakes and rivers. When these subterranean water features drained, the caves were left behind. Secondary mineral deposits, or speleothems, were formed at this stage, creating incredible stalagmites and stalactites stained in a rainbow of colors.

Artifacts discovered during later cave surveys show that the Cango Caves were inhabited by our prehistoric ancestors since the Early Stone Age. Ancient San rock paintings at the entrance of the cave indicate that these semi-nomadic hunter-gatherers used the first cave for shelter until approximately 500 years ago. It seems unlikely that they ventured further into the cave system than the entrance, however, and the rock art they left behind has suffered extensive damage in the years since their departure.

Discovery of the caves in modern times is usually attributed to a local farmer, Jacobus Van Zyl, who owned the land above them. He was lowered into the cavernous hall now named in his honor in 1780. News of the caves spread, and visitors from across the Cape came to see them for themselves. Many broke off pieces of the stalagmites and stalactites as souvenirs or carved their names into the cave walls. So many guests were doing so that in 1820, the Governor of the Cape published the first regulations to preserve the cave system.

The first official tour of the caves was conducted in 1891, making the Cango Caves the oldest tourist attraction in South Africa. The first full-time guide, Johnnie van Wassenaar, is credited with opening many of the side chambers and introduced thousands of people to the caves during a career that spanned four decades. Legend has it that van Wassenaar successfully explored to the end of the cave system, which he estimated to be some 15.5 miles long. However, more recent explorations have only mapped a fraction of that distance.

The surveyed length of the cave system extends for at least 2.5 miles and is divided into three sections: Cango 1, Cango 2, and Cango 3. The third extension was only discovered in 1975 after an underwater passage was drained to allow access. Only Cango 1 is open to the public, accounting for approximately one quarter of the mapped system. Here, the caves are illuminated with spotlights that show off the dripstone caverns, grand halls, and towering limestone formations to dramatic effect.

Highlights of the Cango Caves

Geological highlights include Van Zyl Hall, which at 350 feet in length and 177 feet in width is roughly the size of a soccer field; and Cleopatra’s Needle (a 33-foot dripstone stalactite thought to be 150,000 years old). Other fancifully named formations include the Organ Pipes, the Ballerina, and the Frozen Waterfall. The Cango Caves complex also features an interpretive center with an auditorium screening a short film about an expedition to Wonder Cave in Cango 2; a South African restaurant, and a curio shop selling African crafts, books, and gemstones.