The widespread practice of buying small quantities of food and toiletries produces tons of waste and contributes to global emissions. 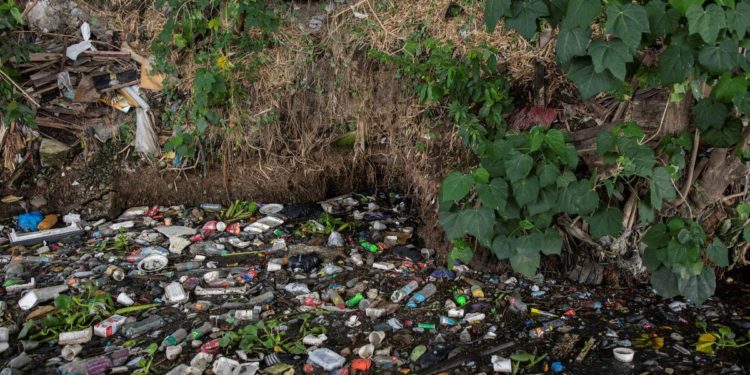 In the Philippines, small works best for penny-counting consumers, but big problems ensue for the environment from the packaging that supports the tradition.

The widespread practice of buying small quantities of food and toiletries produces tons of waste and contributes to global emissions.

The culture of tingi－the buying and selling of small amounts of everything from soy sauce to shampoo－has helped millions of poor families to meet their needs. But environmental advocates say this has also led to the production of a massive number of plastic-based sachets. They cannot be recycled and end up polluting the environment.

To make matters worse, these sachets and other single-use plastic products are a byproduct of the emissions-intensive petrochemicals industry.

Break Free From Plastic, a global coalition of environmental organizations, said in a report that consumer goods producers and fossil-fuel companies need to be “accountable for their pollution”.

“Plastic is made from fossil fuels, and the world’s addiction to single-use plastic is a serious contributor to the climate crisis,” the group said in the report, which was released ahead of the COP 26 climate summit in Glasgow, Scotland. “If the entire plastic life cycle were a country, it would be the fifth-largest emitter of greenhouse gases in the world.”

In the case of the Philippines, the group said, the country is “flooded with single-use plastic” and that sachets comprise 52 percent of residual plastic waste, as Filipinos dispose of 164 million sachets every day. These sachets clog waterways, harm wildlife and threaten the tourism and fisheries sectors.

Coleen Salamat, plastic solutions campaigner at the Ecological Waste Coalition in Manila, said people use plastic products because they are convenient and cheap. But the low prices do not take into account the environmental impact of their production.

“The plastic product itself is made up of fossil fuel, so that kind of cheapness is actually expensive－at the expense of the environment,” Salamat said.

Czarina Constantino-Panopio, national lead of the No Plastics in Nature Initiative at the World Wide Fund for Nature-Philippines, cited a study by the fund showing that, in 2019, the Philippines’ per capita plastic consumption was 20 kilograms, more than 15 kilograms of which end up as waste. She said only 9 percent of the plastic products were recycled.

Plastic consumption is estimated to have significantly increased in 2020 and 2021 because of the pandemic. Not only have people been wearing masks and face shields, the lockdowns also boosted demand for online shopping and food deliveries－with plenty of plastic packaging.

The low level of recycling has worsened the problem of plastic pollution in the Philippines, Constantino-Panopio said.

The Ecological Solid Waste Management Act of 2000 requires local governments to reduce waste by 25 percent by establishing an integrated solid waste management plan and setting up facilities for waste segregation and recycling.

Environmentalists say it is difficult to enforce the law as the Philippines is a sprawling archipelago. Additionally, most cities are congested and have no space for a materials recovery facility.

Plastic products have also diversified and that makes it a challenge for consumers to separate out what can still be recycled. While there are enterprises in the Philippines that buy and sell scrap, waste segregation bins are still rare in most parts of the country.

According to a World Bank study on plastic waste in the Philippines, the country generates 2.7 million tons of plastic waste each year and an estimated 20 percent ends up in the ocean.

The report, released in March, said the Philippines had a large recycling capacity gap of 85 percent in 2019 and attributed this to several factors, including high logistics costs, steep electricity rates that burden recyclers who operate low-efficiency equipment, and low landfill tipping fees that discourage local governments from investing in waste management solutions.