The COVID-19 outbreak has exposed one of the Philippines' biggest public health ironies: A country which has long been a source of nurses worldwide can barely cope with a crisis at home. 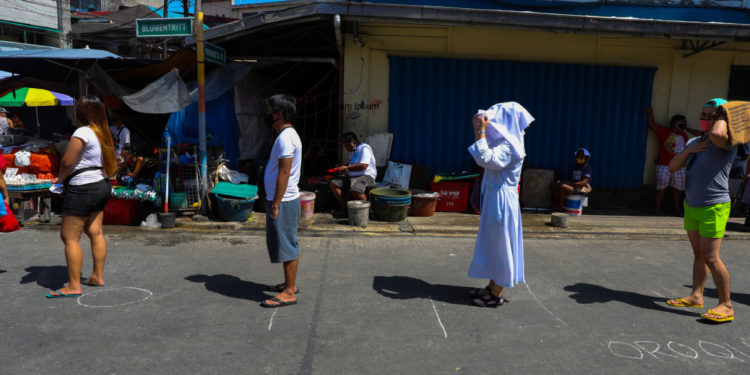 People stand on designated spots to maintain social distancing at a market in Manila on Tuesday as a preventive measure against the novel coronavirus outbreak. MARIA TAN/AGENCE FRANCE-PRESSE

The Philippine Overseas Employment Administration said the country has a shortage of about 290,000 health care workers and the annual migration of at least 13,000 workers is contributing to the deficit.

But following a public outcry against a possible government ban of foreign deployment of nurses and other health care workers, Cabinet Secretary Karlo Nograles said that all medical and health care professionals who had signed overseas employment contracts as of March 8, are free to leave the country.

Taylor said the outbreak is straining the country’s health system “that was already burdened and under-resourced to carry out routine health services for the population.

“The surge in patients due to COVID-19 and the demand on health workers, especially nurses, has resulted in long working hours under stressful conditions,” he said.

The World Health Organization said that as of Tuesday, the Philippines had 6,459 confirmed cases-the second-highest in Southeast Asia after Indonesia, with 428 deaths.

Reigner Jireh Antiquera, president of the Alliance of Young Nurse Leaders and Advocates, or AYNLA, said: “We have a nursing shortage and this is affecting the government’s response against COVID-19 because the nurses are the backbone of our health care system.”

Antiquera said the Philippines produces at least 40,000 nursing graduates each year. And yet most hospitals lack nurses, as low wages force these nurses to either go overseas or work as call center agents.

He said most nurses earn below 12,000 pesos ($236) a month-barely above the minimum wage level of roughly 10,000 pesos a month. This is a far cry from the roughly 20,000 pesos per month starting salary at a business process outsourcing firm. A Filipino nurse who goes to the United States, the Middle East or the United Kingdom can earn the equivalent of over 200,000 pesos a month.

According to a report issued on April 7 by the WHO, the International Council of Nurses and the Nursing Now campaign, there are just under 28 million nurses worldwide.

Between 2013 and 2018, nursing numbers increased by 4.7 million. But this still leaves a global shortfall of 5.9 million.

Nowhere is this shortage more apparent than in the Philippines where the exodus of nurses started as early as 1948.

The first batch of nurses to leave went to the US under an exchange program.

More followed in the 1960s, and the post-World War II nursing shortage then became more acute.