Scientists have labeled the British government plans to fully lift COVID-19 social restrictions on July 19 as a "dangerous and unethical experiment". 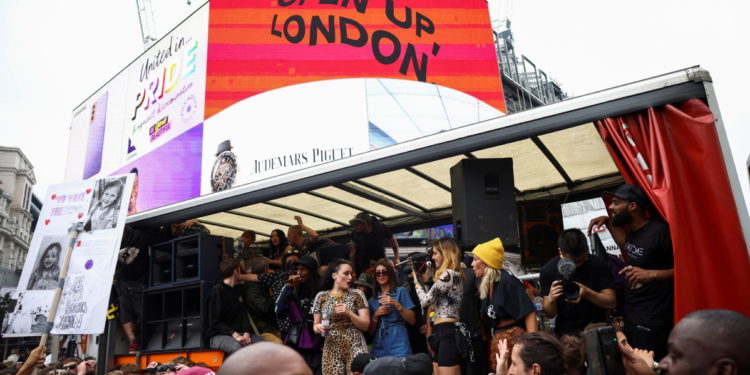 As more people are vaccinated, Prime Minster Boris Johnson is committed to fully re-opening the economy in two weeks’ time, and effectively forcing the nation to live with the virus.

Vaccines are proving effective at preventing deaths and severe disease, but less so at halting transmission, and Health Secretary Sajid Javid has warned cases could reach 100,000 per day in the summer.

The government estimates that 64.6 percent of UK adults are fully vaccinated, while it says more than 86 percent of adults have received a first dose.

Despite this, the latest research from Imperial College London has estimated COVID-19 cases were doubling every six days in a new wave fueled by the Delta strain.

Medical experts accuse the government of ignoring the threat of long COVID that can last for months or years, and are urging ministers to reconsider the plans.

In a letter published in The Lancet journal, 122 medical experts have warned that any strategy that tolerates high levels of infection is both “unethical and illogical”.

The signatories warn that an exponential growth of the virus “will likely continue until millions more are infected, leaving hundreds of thousands with long-term illness and disability”.

The experts stress that the risk of long COVID is higher for the most vulnerable, younger people and children, as well as people who were unvaccinated.

Symptoms of long COVID are believed to include fatigue and breathing problems and experts say that 90 percent of hospitalized patients suffer from it. As many as 20 percent who are not admitted to hospital are estimated to experience the long-term illness.

The letter said: “This strategy risks creating a generation left with chronic health problems and disability, the personal and economic impacts of which might be felt for decades to come”.

The scientists expressed fears that the strategy also “provides fertile ground for the emergence of vaccine-resistant variants”.

The lifting of restrictions on July 19 means limits on social contact in England will disappear, and the rule of six indoors and the limit of 30 people for outdoor gatherings will be ended. However, all rule changes in England are due to be confirmed on July 12 after a review of the latest data.

Quoted in the Daily Mail, epidemiologist Deepti Gurdasani, a senior lecturer at Queen Mary University who organized the letter, added: “The government has made a deliberate choice to expose children to mass infection, rather than protect them in schools or vaccinate them.

“This is unethical and unacceptable. Our young have already suffered so much in the past year, and are now being condemned to suffer the consequences of this dangerous experiment.”

In a statement, Richard Horton, the editor-in-chief of The Lancet, said: “Contrary to the statements of government scientists, there is no scientific consensus over the government’s current plans to remove protective mandates on 19 July.

“Instead, there is deep disagreement. Many scientists are sincerely concerned that with sub-optimal double-vaccination numbers and rapidly rising transmission rates, we are at a very dangerous moment in the pandemic.”

Quoted in a Financial Times report on Thursday, David Strain, a senior clinical lecturer and COVID researcher at Exeter University, said ministers are ignoring the threat of long-term illness caused by the virus.

“Many of us have been urging the new health secretary Sajid Javid to consider long COVID when evaluating the easing of lockdown,” Strain said.

“But he does not seem to have taken it into account at all, even though long COVID is probably going to have more impact on the economy than any other aspect of the pandemic,” he added.

Meanwhile, Transport Secretary Grant Shapps told members of Parliament on Thursday that fully vaccinated UK residents and all children arriving in England from amber travel list destinations will no longer have to quarantine from July 19. But he said people will still need to pay for COVID PCR tests before and after their return.

The guidance that people should not travel to amber list countries will be removed on the same date, meaning holidaymakers can travel for leisure purposes and to see family members.

The travel industry is prepared for a surge in demand following the announcement and has welcomed the changes, the BBC reported. In a statement, Tim Alderslade, chief executive of the Airlines UK industry body said: “The summer season essentially starts here. This is a positive move towards the genuine reopening the sector has been looking for.”