US House votes to remove Confederate statues from Capitol

There are currently 11 statues of people who served in the Confederacy, either as officials or soldiers, displayed in the U.S. Capitol complex. 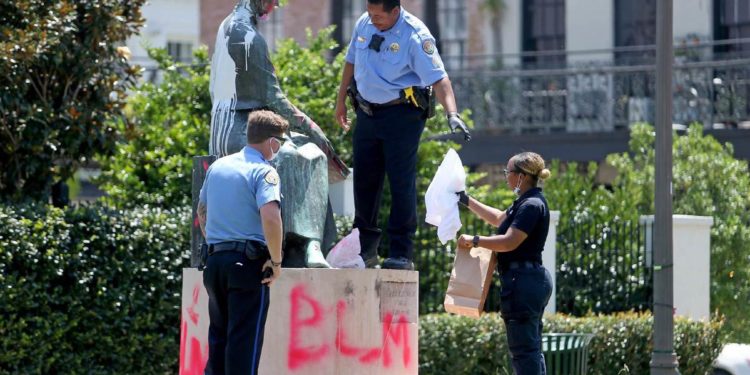 WASHINGTON — The US House of Representatives, where Democrats have a majority, approved legislation on Wednesday that would remove Confederate statues from the Capitol.

The legislation was passed in a 305-113 vote, with all of the “no” votes coming from Republicans.

It’s unclear if the Republican-controlled Senate will take up the legislation.

The statues are part of the National Statuary Hall Collection, created in 1864 with a law that allows states to select two statues of deceased individuals to be displayed in the Capitol.

The bill which the House passed on Wednesday would remove all of the Confederate statues in the collection within 120 days. The statues could either be reclaimed by the states or given to the Smithsonian Institution, a U.S. museum and research complex.

The bill would also replace a bust of the former Supreme Court Chief Justice Roger Taney with one of Thurgood Marshall, the first African American Supreme Court justice.

In 1857, Taney authored a decision that ruled African Americans didn’t have the rights of citizens.

U.S. states and cities have removed some statues of Confederate figures amid a national reckoning over police brutality, racism, and slavery, sparked by the death of George Floyd, a 46-year-old African American man who died in May after a white police officer kneeled on his neck for nearly nine minutes.

The House on Tuesday passed its annual defense policy bill, including a section that requires the Pentagon to rename military properties named after figures who fought for pro-slavery Confederacy during the Civil War.

The White House has said it strongly objects to renaming U.S. bases, calling it efforts “to erase from the history of the Nation those who do not meet an ever-shifting standard of conduct.”