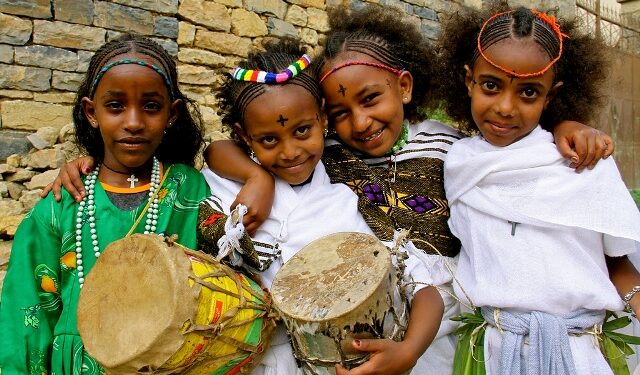 Unlike worldwide norms, Ethiopians do not celebrate their New Year on the 1st of January each year, instead Ethiopia, one of two African countries never colonized by the west celebrates its new year on September 11 or 12 during a leap year.

The country has its own unique calendar in the world with 13 months. Each of the 12 months has 30 days, the 13th month called ‘Pagumen’ – has 5 days or 6 during each leap year. Ethiopian families celebrate the first day that heralds the Ethiopian New Year together attending traditional events.

Enkutatash (Ge’ez: እንቁጣጣሽ) is also a public holiday in coincidence of New Year in Ethiopia. It occurs on Meskerem 1 on the Ethiopian calendar, which is 11 September (or, during a leap year, 12 September) according to the Gregorian calendar.

For Ethiopians who celebrate the first day of the essentially indoor Ethiopian New Year mostly wearing traditional attire, slaughtering animals, preparing traditional drinks and foods, accompanied with songs and dances, and a lot more events, its’ considered as a special moment of renewal.

The national dish, doro wot (chicken stew), is among the common dishes served with Enjera (a flatbread) along with local alcoholic drinks on a large platter so that everyone can dine together. There is no better time than the holidays such as this one for people who would like to relish Ethiopian coffee in all its glory.

Ethiopian President Sahle Work Zewde and Ethiopian Prime Minister Abiy Ahmed, among others, expressed their best wishes for the Ethiopians celebrating New Year in the country and abroad.