The World Health Organization said around 200 doses of the rVSVZEBOV Ebola vaccine have been shipped to the region from the eastern city of Goma. 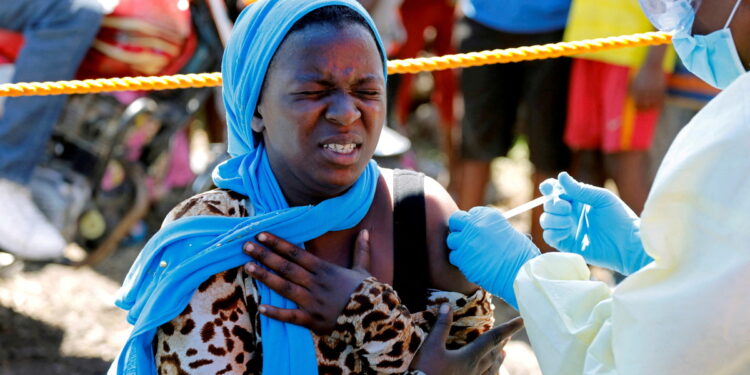 The Democratic Republic of the Congo kicked off its Ebola vaccination drive on Wednesday in its northwestern Equateur Province to halt the spread of the Ebola virus, following an outbreak that has claimed two lives since April 21.

The World Health Organization said around 200 doses of the rVSVZEBOV Ebola vaccine have been shipped to the region from the eastern city of Goma.

“More doses will be delivered progressively in the coming days. The vaccination uses the ‘ring strategy’ where the contacts and the contacts of contacts of confirmed Ebola patients are given the vaccine as well as frontline and health workers,” said the WHO in a statement.

So far, three vaccination teams are on the ground and will focus on reaching all people at high risk.

“With effective vaccines at hand and the experience of the Democratic Republic of the Congo health workers in Ebola response, we can quickly change the course of this outbreak for the better,” said Matshidiso Moeti, WHO’s regional director for Africa, in a statement.

The DRC has seen 13 previous Ebola outbreaks, including one in 2018-2020 in the east of the country that killed nearly 2,300 people, the second-highest toll recorded in the history of the hemorrhagic fever.

Over the years, with the support of the WHO and other partners and donors, the country has developed homegrown expertise capable of mounting an effective Ebola response.

The country’s National Institute for Biomedical Research has completed an analysis of a sample from the first confirmed case, results of which show that the new outbreak indicates a new spillover event from the host or animal reservoir, the WHO said.

“Investigations are ongoing to determine the source of the new outbreak and how it came to infect the first confirmed case,” it said.

In addition to the vaccination campaign, an Ebola treatment center has been set up in the affected region. Disease surveillance and investigation of suspected Ebola patients are already underway to detect new infections, and the WHO has also provided material support as well as six epidemiologists to assist in the response.

Equatorial forests in the Congo area are a natural reservoir for the Ebola virus, which was discovered near the Ebola River in northern Congo in 1976. Fatality rates of the disease have varied from 25 to 90 percent in past outbreaks, according to the WHO.