Kipanya used his own money to fund the project, which cost him almost $50,000. 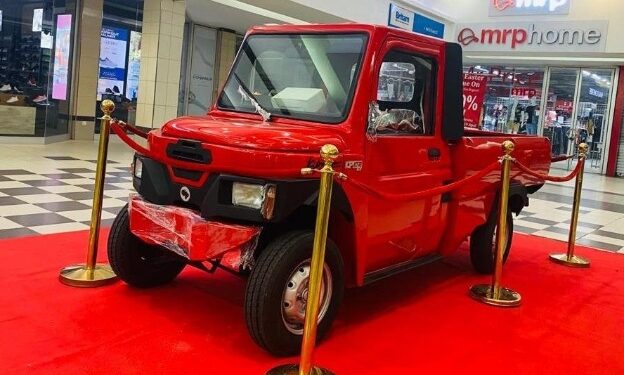 Masoud Kipanya is a jack of all trades.

He is famous in Tanzania and across Africa as an award-winning cartoonist, but he is also a respected radio journalist, runs a clothing company called Kipanya Wear and, to the surprise of many, recently showed an electric vehicle he invented.

The environmentally friendly car, branded as the Kaypee Motor, is Tanzania’s first locally made electric vehicle and was made from locally sourced materials. It requires six hours of charging to run from 50 to 60 kilometers.

Kipanya studied fine arts at a university, but he believes it is almost impossible to survive in Africa without diversification.

“Humans, especially Africans, utilize very little of their capacity. That is why when people see me doing all this, they think I am from another planet. I believe I can do more than what I have so far done. I once watched a man who built his own small plane in his backyard workshop. I am thinking of doing the same,” he said.

The cartoonist said that his love for invention and admiration of people who make things from scratch is what drove him to come up with the vehicle.

“For the past 10 years, I have lived with this dream of making a car. Somewhere my idea changed to a boat, but I went back to the car. The reason why I wanted to shift to boats was … that on African roads, you do not see a car made by an African, so I felt that it would be impossible to get certified by the authorities,” Kipanya said.

Despite his lack of engineering and car-building knowledge, passion to achieve his dream pressed him to go ahead, Kipanya said.

“You don’t have to be an engineer to build a car or a plane; you need passion and skills in coordination. It is a matter of knowing what you want and how to get it,” he said.

The main challenge was that not everyone around him shared the dream.

“Most of my workers did not believe in what I was planning to achieve. I remember the first welder … left within two months. I am sure others stayed, not because they believed in the dream, they stayed because they were getting paid,” he said.

Kipanya used his own money to fund the project, which cost him almost $50,000. So far, no one has shown interest in financing the venture for mass production, but he said it is too early to say he will not get funding.

Since he is just starting, he needs more partners to fully develop the car and possibly move it to mass production. He believes clean energy is the future and the market for his product exists, especially in Africa.

“I have started receiving messages from people who are interested in the car and would like to own one. I even received a message from Mauritius asking if I am willing to export the car to Mauritius.

“However, I would love to collaborate with companies like China’s BYD Auto. I know they are experienced in clean energy technology and they have the resources to help a startup like myself,” Kipanya said.

The Tanzanian government has been supportive of his project, he said, adding that the Tanzania Bureau of Standards has finished inspecting the car and will soon provide certification. The government has also recognized him as a local investor and is about to offer him official registration.

To young and upcoming entrepreneurs in Africa, he said, the world is full of dream killers, but that should not break their resolve to work for their dreams.

“Do not listen to negativity. I meet a lot of negative comments especially on social media, but I shrug it off. Keep focusing on your dream…. If you stumble, dust yourself off and continue. … If Kipanya can do it, you can do it,” he said.