The new textile hall is part of the recently opened National Museum of Egyptian Civilization in the Fustat neighborhood where Egypt's first Islamic capital was located. 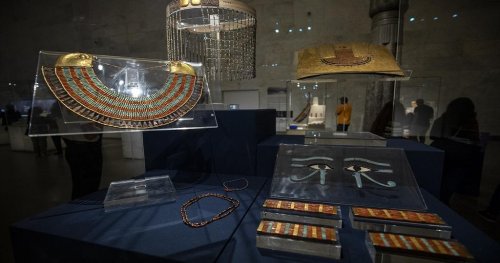 The exhibition has around 650 items giving visitors of the Museum the chance to see clothes worn through various eras in Egyptian history, going all the way from Ancient Egypt to modern times.

Said Abo al-Fadl, spokesman for the Ministry of Antiquities, gives the background of the arrangement of the exhibition and what they represent. “We are currently inside the Egyptian textile hall which consists of two floors. The ground floor shows Egyptian heritage textiles from Ancient Egypt, the Greco-Roman period, the Coptic and Islamic periods as well as modern and contemporary times. The upper floor hosts belongings from the Muhammad Ali dynasty, clothes, jewelry, and outfits worn by people in certain jobs in that era. There is also a stage that shows traditional outfits from various Egyptian regions like Sinai, Siwa, Upper Egypt, the Delta, and different areas all over Egypt,” he said.

The new textile hall is part of the recently opened National Museum of Egyptian Civilization in the Fustat neighborhood where Egypt’s first Islamic capital was located. The eye-catching textile hall also features traditional outfits from across the country that was preserved because they were passed down from generation to the next.

“If you look at the traditional clothes, you will find very old outfits which means that these were passed down from generation to the next and we only got access to them because generations kept passing them down. We would have never known about these outfits from Sinai, Siwa, Upper Egypt, and Assiut. People don’t wear these clothes anymore but it is a way of staying rooted in the Egyptian heritage. It is not all about antiquities, heritage is very important too. And if you didn’t preserve your heritage, you won’t have an identity,” Abo al-Fadl concluded.

Last year, this massive museum was the final resting place of 22 prized royal mummies that Egypt transported in a gala parade and most of the items on display in this hall were once exhibited at the textile museum located in the famed Moez Street.

The exhibition is designed to showcase the country’s rich heritage, snaked along the Nile corniche from the Egyptian Museum overlooking Tahrir Square.