Chair Lewis last November led an EXIM delegation to the Africa Investment Forum’s 2022 Market Days in Abidjan, Côte d’Ivoire, where the relationship with the three institutions was consolidated. 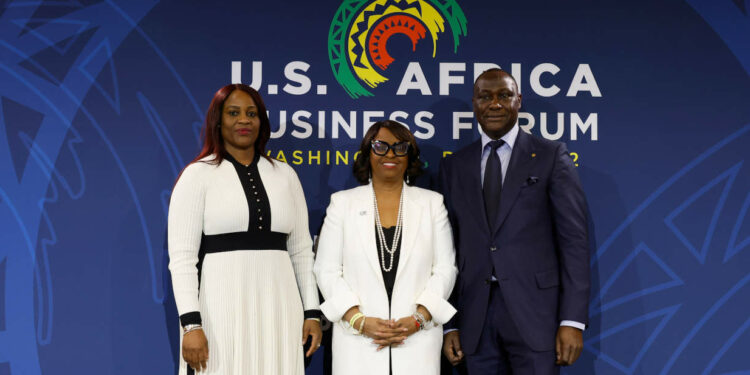 Africa Investment Forum (AIF) last week garnered strong support in the U.S. to help advance key infrastructure projects for the continent. Three founding members of the Africa Investment Forum signed memoranda of understanding worth over $1 billion with the Export-Import Bank of the United States (EXIM) to expand American trade and investment in Africa.

Exim President and Chair Reta Jo Lewis signed the agreement with the heads of the African Export-Import Bank, Africa Finance Corporation, and Africa50 at the three-day US-Africa Leaders Forum convened by the Biden Administration on 13 December 2022. The US-Africa engagement took place amid global fragility and as Africa faces an infrastructure financing gap estimated at more than $100 billion per year.

“The partnerships we are establishing today are very much a demonstration of EXIM’s commitment to resetting and renewing our outreach efforts with Africa,” Lewis said in remarks at the signing in Washington, DC.

She said while collaboration with Africa is one of EXIM’s mandates, it is also a Biden-Harris Administration priority, “one that we are dedicated to fulfilling in support of the advancement of U.S. exports.”

She spoke about the significance of strengthening the partnerships between the Africa Investment Forum, American government institutions, and the US private sector. The forum brought together U.S. and African business and civil society leaders, media, and members of the diaspora in Washington, D.C.

Earlier in the week, EXIM named Anohu as one of the 15 global women leaders of its Council for Advancing Women in Business, launched during its 2022 Annual Conference. The Council will play a key role in supporting EXIM’s gender equity goals.

The African Development Bank also participated in the celebration of 30 years since the establishment of the United States Trade and Development Agency (USTDA). The event brought together Africa’s preeminent finance institutions to discuss the future of infrastructure finance on the continent. During this meeting, Ms. Anohu and USTDA Director Enoh Ebong highlighted the collaboration between the Africa Investment Forum and the USTDA – which they said has already delivered solid results, particularly in women-led investment.

Several other events took place on the margins of the US-Africa Leaders’ Summit to advance discussions on Africa’s efforts to boost climate action, support creative industries, and foster innovative solutions to the continent’s infrastructure deficit.

These included an opening dinner hosted by the Atlantic Council, where ten Heads of State engaged in dialogue with U.S. and African business leaders. There was also a roundtable with the new global news outlet Semafor, featuring the Africa Export-Import Bank and Atlantic Council on financing African creatives.

Ms. Anohu also attended a program hosted by the Africa Finance Corporation and the Bank of America on innovating finance for climate change.

The summit closed with a commitment from U.S. President Biden for $55 billion in new financing over the next three years to tackle some of Africa’s greatest challenges, including health, climate, digital and trade and investment. The Africa Investment Forum and its founding partners expect to be key implementing partners working with the U.S. administration and the U.S. Congress in executing the new commitments.

The Africa Investment Forum is Africa’s infrastructure investment marketplace, championed by the African Development Bank and seven other founding partners to accelerate the closure of the continent’s investment gaps. It operates as a multi-stakeholder, multidisciplinary platform dedicated to advancing projects to bankable stages, raising capital, and accelerating the financial closure of deals. It also includes a digital platform for investors and project sponsors to profile their investment interests and deals.