A total of 37 people including 12 healthcare officials have died following a gas explosion in Johannesburg's Boksburg suburb, according to the Gauteng provincial government. 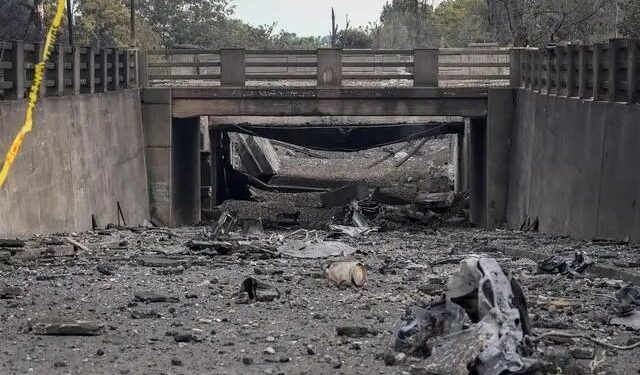 On Dec 24, a truck carrying gas tried to pass under the low-lying bridge and got stuck resulting in some explosions. The incident happened about 100 metres from Tambo Memorial Hospital where 12 healthcare officials were killed and some others who were near the scene. The Gauteng premier Panyaza Lesufi confirmed that 35 officials from Tambo Memorial Hospital were injured during the blast.

“We continue to stand with the many families whose lives have been changed forever by the tragic incident. This has not been an easy period, particularly for those who lost their loved ones. We implore our health professionals to provide the best care to those that are still on the road to recovery,” said Lesufi.

He stated that the injured are at different hospitals where they are being treated while some have been discharged. The initial cost estimates to repair damages at Tambo Memorial Hospital is at over $1.1 million (7.5 million yuan) excluding the bridge which was completely damaged and other infrastructure. The government has deployed clinical psychologists, social workers, and chaplains to counsel the bereaved families. Lesufi said they have sent government officials to attend funerals of the deceased and offer support to the families who lost their loved ones. He explained that contractors have arrived at the Tambo Memorial Hospital to repair so that services could be restored. Deaths have been continuing to rise with more bodies being discovered on the rubble.

The government has launched an investigation to find out what caused the truck, which was carrying 60,000 litres of liquified petroleum gas, to explode. The 32-year-old man who was driving the truck was arrested and charged with culpable homicide, negligently causing an explosion resulting in death and malicious damage to property. He was released on warning while investigations are being carried out.