Sogavare's comments come in the wake of the island nation signing a security pact with China in April, a decision that has drawn criticism from some countries, including the US and Australia. 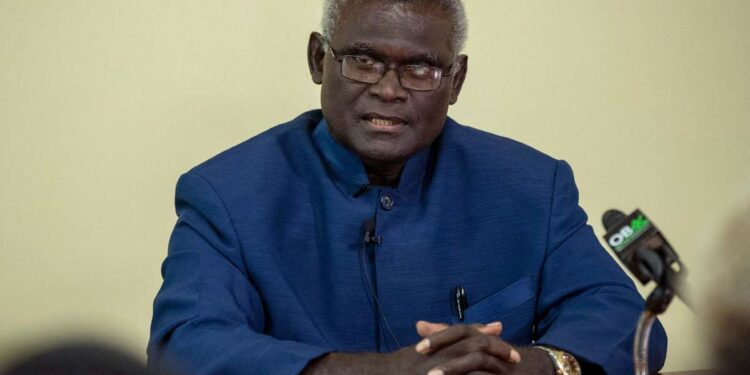 Foreign Ministry spokesman Zhao Lijian welcomed on Thursday remarks made in a speech by Manasseh Sogavare, the prime minister of the Solomon Islands, saying that these exposed the complete double standards of the United States and Australia in terms of their accusations against China.

Speaking to the nation’s Parliament last week, Sogavare hit out at the Australian government for failing to consult with the Pacific nation before joining AUKUS, a trilateral security bloc of the US, the United Kingdom and Australia.

“One would expect that as a member of the Pacific family, the Solomon Islands and members of the Pacific should have been consulted to ensure this AUKUS treaty is transparent,” he said.

Sogavare said his country respects decisions made by Australia as a sovereign country. “When Australia signed up to AUKUS, we did not become theatrical or hysterical about the implications this would have for us.”

Zhao said at a daily news briefing that China’s normal security cooperation with the Solomon Islands differs in nature to some countries forming small circles, which would instigate the arms race, intensify nuclear proliferation, stoke bloc confrontation and lead to a tense situation in the region.

The US should earnestly fulfill its commitment to clearing unexploded ordnance, abandoned during the World War II, from the Solomon Islands and take more practical measures for the people of the country, rather than make reckless comments and interfere in normal cooperation between other countries, Zhao said.

In addition, Sogavare stated in the Solomons’ Parliament that “from last November’s riots, it is obvious, current security agreement with Australia is inadequate to deal with our hard internal threats” while maintaining the new treaty with China does not provide for a naval or military base.