Pakistan has called on the international community to extend all available support to its neighbor in fighting terrorism. 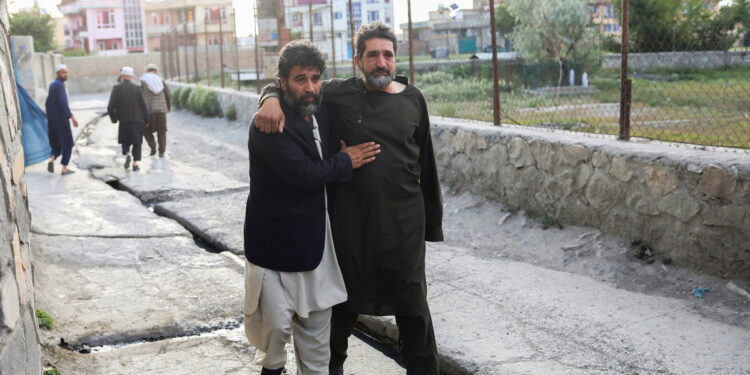 A spate of attacks in Afghanistan and Pakistan highlights the need for improved cooperation on regional security to counter terrorism, say analysts who also blame the United States for deepening instability in the volatile region.

At least 10 people observing the Islamic holy month of Ramadan were killed and 20 others wounded after a blast ripped through a mosque in Kabul on April 29. The previous day, 11 people died and 17 others were wounded in twin bus explosions in the northern city of Mazar-i-Sharif, according to Afghanistan’s Tolo News TV. The Islamic State group reportedly claimed responsibility.

Salman Bashir, a former Pakistani ambassador to China, said terrorist organizations in Afghanistan, such as ISIS-K, an affiliate of the Islamic State, and the Eastern Turkistan Islamic Movement, remain active in targeting Taliban facilities and innocent Afghans two decades after the US military began an occupation of the country with the stated aim of eliminating terrorist groups. That presence ended in August last year with the failure of those goals.

“The international community needs to encourage and support efforts for eliminating terrorism from Afghanistan,” Bashir said.

The Extended Troika Meeting on Afghanistan, attended by the special envoys of China, the United States, Russia and Pakistan on March 31, failed to issue a joint statement, reported Sputnik News.

The US wouldn’t agree on a joint statement because of what has been done by one of the members of the extended Troika “somewhere else other than Afghanistan”, the report quoted the sources as saying.

The mess the US and its Western allies left behind in Afghanistan might also cause even more mayhem for its hapless people, Ishtiaq Ahmad, vice-chancellor of Sargodha University in Pakistan, wrote in an article on the Arab News website. Only proactive engagement by the United Nations in Afghan affairs can heal their wounds.

Iran’s parliamentary speaker Mohammad Baqer Qalibaf said on Sunday that Washington is seeking to worsen the insecurity in Afghanistan and to plunge the people of the war-weary nation into an unprecedented crisis, according to the Islamic Republic News Agency.

Qalibaf, addressing an open session of the parliament, accused the US of using Islamic State to compromise Afghanistan’s security and foment “ethnic-religious sedition” in the country, as well as to pressure the Taliban-led caretaker government to “yield to its demands”. Qalibaf said the US uses the militant group to build divisions in Afghanistan in order “to blackmail the government in Kabul”, the IRNA reported.

Pakistan has called on the international community to extend all available support to its neighbor in fighting terrorism. “We believe these heinous acts of terrorism against innocent Afghans are aimed at weakening the resolve of the Afghan nation in pursuit of peace, stability and progress,” the Pakistani Foreign Ministry said last week.

In the terror attack in Pakistan, a suicide bomber targeting employees of the Confucius Institute at the University of Karachi left three Chinese teachers dead and one injured on April 26. The attack was condemned widely, including by the United Nations Security Council.

Karori Singh, a former director and emeritus fellow of the South Asia Studies Centre at India’s University of Rajasthan, said it is imperative that Pakistan remain part of China’s Global Security Initiative, which was unveiled at the Boao Forum for Asia in April.

“It is necessary to take effective measures to prevent a recurrence of such incidents in future” and ensure for the country’s development partners “foolproof safety and security of their citizens”, Singh said.

“The attack on three very important academics is a heinous attack. It does represent an attack on humanity,” said Amina Khan, director of the Centre for Afghanistan, Middle East and Africa at the Institute of Strategic Studies in Islamabad.