Beijing is using 'all instruments' of its 'national power' to challenge the United States, the Navy’s top uniformed official said 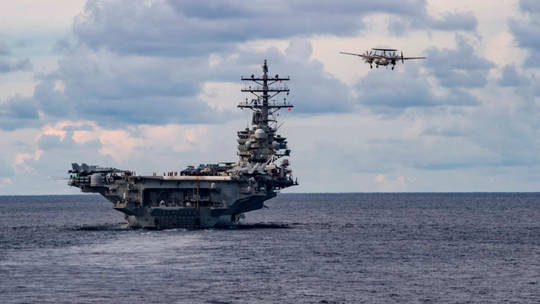 A senior US military officer has identified China as a “focal point” for the Navy, citing the “phenomenal growth” of Beijing’s military and its ambitious goals for the years ahead.

Speaking at an event hosted by the Center for Strategic and International Studies (CSIS) on Thursday, Chief of Naval Operations Admiral Michael Gilday called for a “whole-of-government approach to deterring China,” arguing the country is “challenging us through all instruments of their national power.”

“We certainly have a lot of respect for them based on their ability to learn and evolve,” he said. “Thinking about the facts related to China and their phenomenal growth in the military dimension, but also in the economic dimension, not just regionally but globally – they’ve exceeded every deadline they’ve ever set for themselves.”

The admiral went on to note that while Beijing had once set a deadline of 2050 to become “a global power,” it has since moved up that timeframe, first to 2035, and more recently to 2027.

“And so we take that ’27 timeframe, that President Xi [Jinping] has talked about publicly, very seriously,” Gilday said, adding that Washington therefore seeks to maintain capabilities to “fight tonight” if needed.

In terms of keeping an edge over Chinese forces, Gilday said he would like to see more funding devoted to “weapons that are going to matter in a fight,” arguing Congress should “max out domestic production lines for weapons at range, speed, lethality, and capability in 2023.” He added that the US has maintained “enduring advantages” with its submarine force, as well as in the areas of quantum computing, artificial intelligence and unmanned vehicles and vessels.

Asked about American cooperation with allied states in Asia, the Navy official noted that he had spent significant time with his counterparts in India, a nation he deemed a “huge strategic partner in the future” with respect to confronting China in the Indo-Pacific.

“If you’re concerned about China, you can’t build a navy fast enough to understand what’s going on in [the Indian Ocean],” Gilday said, summarizing his discussions with Indian officials. He noted that New Delhi had “joined the coalition maritime force in the Fifth Fleet,” a US-led multinational body active in waters near the Middle East, Africa and South Asia.

Gilday’s comments are in line with similar statements from US officials in recent years, and the Biden administration has repeatedly named Beijing as Washington’s top competitor on the world stage. Since Joe Biden took office in 2021, the military has conducted near-monthly transits of the disputed Taiwan Strait, which China considers part of its maritime territory, as well as other areas of the South and East China Seas. The Pentagon has also urged lawmakers time and again to step up funding for China-related ‘deterrence,’ including the construction of a multi-billion dollar “highly survivable, precision-strike” missile network located not far from Beijing’s shores.