With 20 years of experience in international relations, energy policy and renewable energy, Schroth has built a strong network of partners in the areas of energy and climate change. 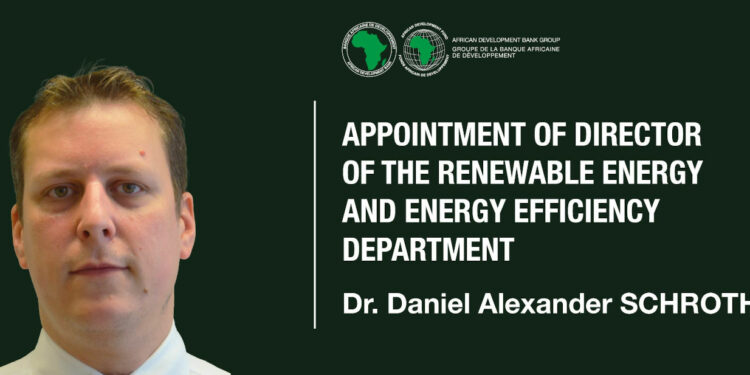 The African Development Bank is pleased to announce the appointment of Dr. Daniel Alexander Schroth as Director of the Renewable Energy and Energy Efficiency Department, effective 16 May 2022.

Prior to his appointment, Schroth, a German citizen, served as Acting Director.

Schroth joined the Bank in 2012 following several senior appointments with various international organizations, including as Political and Economic Adviser to the EU Special Representative for Bosnia & Herzegovina; Economic Adviser in the EU Delegation to North Macedonia; Energy Sector Coordinator for the United Nations Mission in Kosovo, and for the European Bank for Reconstruction and Development’s natural resources team in London.

Since joining the Bank as Principal Energy Specialist in the Energy, Environment and Climate Change Department, Schroth has led various projects across the continent and coordinated several partnerships, including the Sustainable Energy for All Africa Hub, the Africa Climate Technology and Finance Center, the Green Mini-Grid Market Development Program and the Bank’s involvement in the EU-Africa Infrastructure Trust Fund.

In July 2017, he was appointed Advisor to the vice president of the energy complex. Under his leadership, various partnership agreements were concluded, such as the Regional Development Objectives Agreement with USAID/Power Africa and the $600 million Korea-Africa Energy Investment Framework. Schroth  served as Acting Director from January 2019 up to the time of this appointment.

As Acting Director, he presented various renewable energy projects to the Board of Directors of the African Development Bank, including projects under the flagship Desert to Power initiative and projects in new business areas such as decentralized energy access, energy efficiency and clean cooking. He oversaw the conversion of the Sustainable Energy Fund for Africa, into a Special Fund, making it the first in-house blended finance facility, and led the mobilization of over $300 million in new grant contributions from donors, an achievement that contributed to the Bank being named multilateral development finance institution of the year in 2021, by Global Finance.

He has also been responsible for the mobilization of large-scale climate finance, including over $320 million from the Green Climate Fund for the Leveraging Energy Access Finance Framework, and the Sahel G5 Desert to Power Financing Facility.

With 20 years of experience in international relations, energy policy and renewable energy, Schroth has built a strong network of partners in the areas of energy and climate change. He is a recognized expert on Africa’s renewable energy sector and has represented the Bank in many high-level international fora and conferences. He serves on several steering and oversight committees and is a member of the SDG 7 Technical Advisory Group.

Commenting on his appointment, Schroth said: “I am grateful for the confidence placed in me by President Adesina to scale up theAfrican Development Bank’s support for the deployment of renewable energy and energy efficiency projects across the continent, with a view to ensuring that the Bank is at the forefront of driving Africa’s just energy transition.”

Schroth holds a Ph.D. and an M.Phil in International Relations, with a focus on international energy policy, from the University of Cambridge, United Kingdom, and degrees in international business administration from Reims Management School, France, and the European School of Business, Reutlingen, Germany.

President of the African Development Bank Group, Dr. Akinwumi A. Adesina, said: “I am delighted to appoint Dr. Daniel Schroth as Director of the Renewable Energy and Energy Efficiency Department. Daniel, a respected professional, will lead the team to support the Bank’s Regional Member Countries to develop renewable energy, energy efficiency and clean cooking solutions as part of their energy systems, through a combination of public and private sector operations, and he will also spearhead the delivery of the Bank’s relevant flagship programs.”