Most teachers failed to report for duty when schools reported for the first term of 2022, citing incapacitation due to poor salaries. 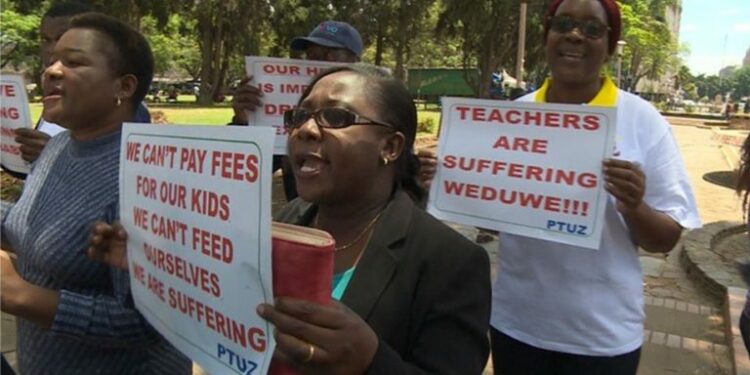 GOVERNMENT has launched a massive investigation aimed at expunging at least 22 000 teachers and headmasters accused of participating in the February strike. They were demanding to be paid the pre-October 2018 salary of US$540.

In response, the government suspended teachers it deemed truant. The country has about 140 000 teachers employed at public schools.

But the Amalgamated Rural Teachers Union of Zimbabwe president Obert Masaraure said the figures of suspended teachers were alarming.

“At the moment we have recorded around 1 220 teachers who have been suspended, including school heads while 22 000 are being investigated. We have been challenging the suspension because it is illegal. We hope the courts overturn these suspensions.  We can’t have a country being run like this. Our labour laws don’t allow such things,” Masaraure said.

Progressive Teachers Unions of Zimbabwe (Ptuz) president Takavafira Zhou claimed that the number of suspended teachers was over 5 000.

“Actually 22 000 is an understatement because more than 50 000 are under investigation by the government. We have more than 5 000 who are already on suspension without pay yet the law is very clear that unless you have a criminal record you can be suspended on half salary. So the whole essence of the assault on teachers by the government is very unfortunate,” Zhou said.

“There has been expulsion of teachers from the census programme. More than 25 000 teachers have already been expelled from the current exercise.   We had legally notified our employer, the PSC that the teachers were incapacitated.

“So the legal issue is not between the Primary and Secondary Education ministry and teachers, but it is between the PSC and teachers.  There seems to be a political directive to punish teachers. Teachers are the most qualified to conduct the census programme and they have experience. It is just Zanu PF’s attempt to reward its foot soldiers. It is an unfortunate political expediency because we did not expect to see that 42 years after the country’s independence,” Zhou added.

Masaraure said Artuz would sue government for barring teachers who declared incapacitation from participating in the population census.

“We are looking at the case, we understand that some teachers who had gone for training as census enumerators had legitimate expectations from the employer, but they were expelled after signing the contracts. So we will be investigating the matter and we are going to sue the government. This demonstrates the high level of vindictiveness of our government,” Masaraure said.

The government has said it will engage youths and civil servants for the 2022 census.