Other sports partnership deals include that of English Football Club, Arsenal as well as the most recent National Basketball Association (NBA). 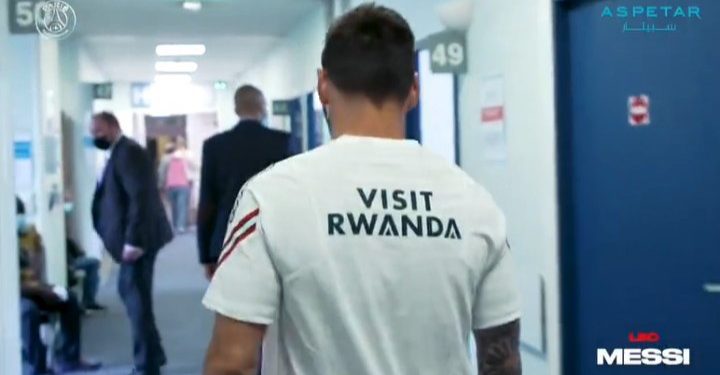 The Rwanda Development Board (RDB) has said that three years after the launch of the ‘Visit Rwanda’ campaign aimed at promoting the country as a world class tourism destination, return on investment has more than doubled, a trend that is expected to continue due to a number of factors.

One of the reasons for this projection, according to Ariella Kageruka, Ag. Chief Tourism Officer at RDB, is the recent transfer of legendary footballer Lionel Messi to French football giants Paris Saint-Germain (PSG).

The Paris based club, is one of the Visit Rwanda Partners, under a deal of displaying the ‘Visit Rwanda’ logo on the back of PSG training kits, pre-game warm up kits and also displayed on the women’s-club shirt sleeves.

The signing of a world class player as that of Messi, however, is not only a boost to the established campaign, but also a new channel for facilitating new deals, Kageruka told the state broadcaster, RTV on Saturday.

“When such a new partner or new signing comes on board through our partnerships it means greater visibility for our campaigns it means that we can reach greater audiences and also varied demographics,” she said.

The move, Kageruka explained, comes at a time when the country seeks to reap big from the 2019- partnership, particularly following previous odds by the pandemic.

“We signed a deal with PSG in December 2019, and a few months later, we were hit by Covid-19,” she added, “So there is not really a way we are going to say that there has been an impact that will be directly associated with PSG alone.”

Despite the country’s 76 percent loss in tourism revenues, Kageruka pointed out that Rwanda remains among the most interesting destinations across the globe.

“Important news do have a direct impact as well on our messaging, for instance since Messi got signed to the PSG squad, and a few hours later, we had an increase of followers. So that’s the kind of leverage that we continue to see.”

While some critics remain skeptical, Kageruka reiterated that the majority of the sports partnerships have progressively paid off both on the media value and economic impact.

For instance, she said, the Arsenal deal has so far generated up to 77 million (pounds) of media value from an initial 36 million, in less than three years.

“And also when you look at our other partnership, we recently signed a new partner, The NBA where we hosted the inaugural season of BAL in May, and with that we managed to get the economic impact that is valued at over $5 million.”

She said, “This is in addition to impressions and viewership across the globe, where we got about $1 billion people watching Rwanda hosting such an iconic event.”

Kageruka said that Rwanda continues to position herself as a world class tourism destination, even on top of the restrictions imposed to fight the spread of the pandemic.

She said that this has been possible through increasing various content series, where RDB features players to showcase Rwanda as a potential tourism destination but also as a country that has a very interesting export commodities.

“By far, the most interesting one is the campaign we got on Amasunzu, which was showcasing our culture, fashion, values which really engaged a lot of traffic.” She reiterated.

According to her, Rwanda is optimistic that it will recover and soon recoup usual tourism revenues, when the situation goes back to normal.