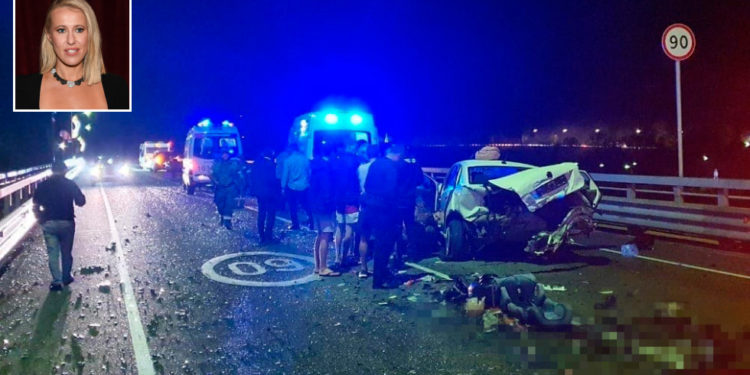 At least one woman was killed after a car carrying journalist, liberal socialite, and former presidential candidate Ksenia Sobchak collided head-on with another vehicle on a mountain road in the Russian Black Sea resort of Sochi.

The accident happened late on Saturday as a rented Mercedes S500 was carrying Sobchak and two of her associates from the ski resort town of Krasnaya Polyana, a key site of the 2014 Winter Olympics, to Sochi airport. Sobchak had apparently been in Sochi to host a corporate event.

The driver of the Mercedes, with whom Sobchak said she had no connection, attempted to overtake a bus, driving into the oncoming lane, but ended up crashing head-on and at high speed into a Volkswagen Polo.

There were three people in the Volkswagen. A 35-year-old female passenger was killed on the spot, while the driver and another passenger, a 29-year-old woman, were rushed to hospital in a critical condition. After the initial collision, the Mercedes veered into the bus, which had 10 people aboard, but none of them was hurt.

Neither the driver nor the passengers of the Mercedes sought medical help at the scene, and media reports suggest it wasn’t they who had called for an ambulance. Sobchak subsequently got into another car and continued to the airport, where she reportedly took a flight to Moscow.

She took to Telegram on Sunday to confirm that she had been involved in the accident, expressing her “horror and shock that people have died.” The 39-year-old social-media darling wrote that she had been rendered unconscious as a result of the impact and had later been diagnosed with a concussion and multiple sites of internal bruising. Sobchak says that she had refused hospitalization in Sochi and had left the Black Sea resort city because she wanted to be with her son.