Putin made the remarks at a meeting on Monday with the leadership of the Defense Ministry and representatives of the defense industry. 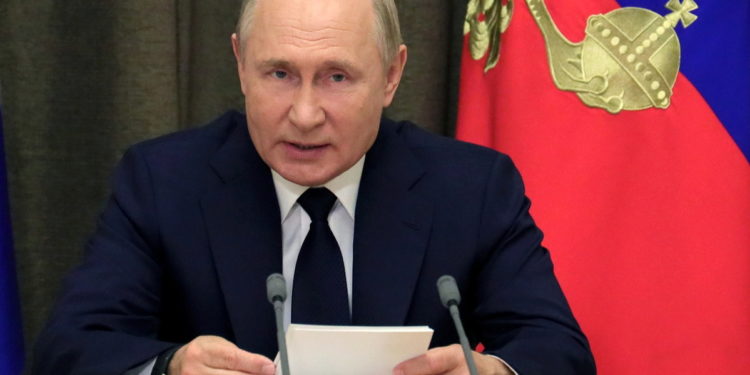 President Vladimir Putin said on Monday that Russia sees threats to its security from attempts by Western powers to do away with the concept of strategic parity in military capabilities, and the country is ready to respond.

“We know, and we know it very well that some of our foreign partners haven’t abandoned attempts to break this (strategic) parity, including through the deployment of elements of global missile defense in the immediate vicinity of our borders,” Putin said.

“We cannot fail to notice these threats to Russia’s security and we will react to this accordingly, adequately to the situation.”

Putin made the remarks at a meeting on Monday with the leadership of the Defense Ministry and representatives of the defense industry. He said the meeting examined issues related to the strengthening of the country’s aerospace forces.

“This is one of the most powerful, high-tech and maneuverable components of the modern Russian army. Reliable protection of Russia against aerospace attacks and maintaining strategic parity directly depend on their combat readiness and equipment,” Putin said.

Reuters said Russia has been concerned that powerful missile defense systems will enable its Western adversaries to abandon the concept of mutually assured destruction that for decades has prevented the nuclear superpowers from attacking each other.

“We know very well that some of our foreign counterparts will not stop trying to break this parity, including by means of deploying elements of global missile defense in proximity to our borders,” Putin said.

At the meeting, Putin stressed that the aerospace defense potential of the Russian armed forces has grown significantly in recent years. “The missile attack warning system …operates flawlessly and efficiently.”

The orbital group of satellites and ground-based radar stations have detected the launches of ballistic missiles without fail, determined their parameters and notified the combat control centers, Putin said.

He pointed to the advantages of Russia’s 25 S-400 air defense systems and the more than 70 jets that have been supplied in the past four years under government programs. Putin also highlighted the modernization of the 20 S-300 systems and 90 aircraft.

Putin said the participation of the US navy command ship Mount Whitney in NATO drills in the Black Sea late last month was part of a trend toward greater Western military activity near Russia’s borders, and he vowed Russia would respond.

The Washington Post said last weekend a renewed buildup of Russian troops near the Ukrainian border had raised concern among some officials in the United States and Europe who are tracking what they consider irregular movements of equipment and personnel on Russia’s western flank.

In Washington, the Pentagon said it was aware of public reports about “unusual activity”. However, the Ukrainian Defense Ministry said in a statement on Monday that “an additional transfer of Russian units, weapons and military equipment to the state border of Ukraine was not recorded”.