Russia is now the seventh most-affected country in terms of infections, having surpassed China, Turkey and Iran this week 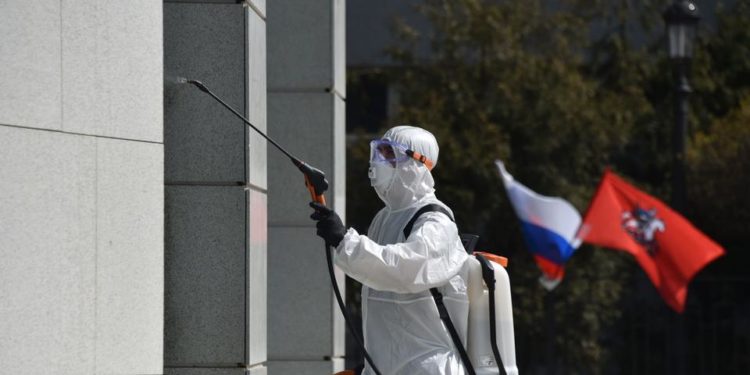 A municipal worker wearing a protective suit disinfects an office building in Moscow, on May 1, 2020 during a partial lockdown amid the Covid-19 outbreak caused by the novel coronavirus.

Iran’s death toll from new coronavirus increased by 65 in the past 24 hours to 6,156 on Saturday, Health Ministry spokesman Kianush Jahanpur said in a statement on state TV.

The total number of diagnosed cases in Iran, one of the hardest hit Middle Eastern countries, has reached 96,448, he said, adding that 2,787 were in critical condition.

Spain has had one of the worst outbreaks in the world, but is past its peak and gradually easing lockdown restrictions.

Joggers and cyclists across Spain emerged from their homes, with adults allowed out for exercise for the first time in seven weeks as the government began easing coronavirus restrictions.

In Barcelona, runners and cyclists crowded paths near the beach, while surfers and paddle-boarders were out enjoying the waves.

In Madrid, cyclists and skateboarders streamed along the city’s wide boulevards, ducking under police tape set up to prevent people congregating in common areas.

The number of people who have recovered from Covid-19, the disease caused by the coronavirus, rose by 74 to 1,665, he said.

The country has tested more than 79,800 people for the virus, he said

Malaysia reported 105 new coronavirus cases on Saturday, bringing the total number of infections in the country to 6,176.

The number of deaths remained at 103, unchanged from Friday.

The Philippines said it has recorded 156 new cases and 24 more deaths, bringing the total number of infections in the country to 8,928 and the fatalities to 603.

It also said that 40 more individuals had recovered from infections, bringing the recoveries to 1,124.

Most of the new cases are among migrant workers living in dormitories, the ministry said.

President Donald Trump said the US Food and Drug Administration (FDA) had granted authorisation to Gilead Sciences Inc for emergency use of its experimental antiviral drug Remdesivir to treat Covid-19 patients.

During a meeting in the Oval Office with the president, Gilead Chief Executive Daniel O’Day called the move an important first step and said the company was donating 1.5 million vials of the drug to help patients.

Thailand reported six new coronavirus cases and no new deaths on Saturday, bringing the total number of cases to 2,966.

New daily infections have stayed in the single digits for six consecutive days, prompting the government to allow some businesses and public parks to reopen starting on Sunday.

Three of the new cases were found on the southern resort island of Phuket, said Taweesin Wisanuyothin, a spokesman of the government’s Centre for Covid-19 Situation Administration.

While more than half of Thailand’s nearly 3,000 cases were concentrated in Bangkok, Phuket has the highest rate of infection per population, Taweesin said.

Since Thailand first detected the coronavirus in January, a total of 54 patients have died, 2,732 have recovered and 180 are still hospitalised, according to official figures

Singapore will start easing some curbs put in place to contain the spread of the coronavirus over the next few weeks, Health Minister Gan Kim Yong said on Saturday.

Selected activities such as home-based businesses, laundry services and barbers will be allowed to operate from May 12.

Some students will be allowed to go back to schools in small groups from May 19.

Some work premises will be allowed to gradually reopen, taking into account their importance to the economy and supply chains and their ability to minimise risks of transmission.

The city-state’s 5.7 million people has among the highest number of infections in Asia, mainly due to outbreaks in cramped migrant workers dormitories.

It has managed to curb the spread of the disease among locals outside the dormitories.

The number of confirmed cases in Germany rose by 945 to 165,022, data from tracker Worldometre showed.

The death toll in the United States climbed by 1,883 in the past 24 hours, a tally by Johns Hopkins University showed, bringing the total number of fatalities to nearly 65,000.

The Baltimore-based university had recorded more than 1.1 million cases in the country as of 8:30 pm Friday (0030 GMT Saturday), with 64,789 deaths, a rise of three percent from a day earlier.

The US has by far the highest death toll of any country in the global pandemic.

China reports one new case versus 12 a day earlier

China reported one new case for May 1, down from 12 a day earlier, data from the country’s health authority showed.

The new case was imported, the National Health Commission (NHC) said, down from six imported cases a day earlier.

China reported no domestic transmission cases down from six the day before.

The NHC also reported 20 new asymptomatic cases for May 1, down from 25 a day earlier.

The total number of confirmed cases in the country has reached 82,875. With no new deaths on Friday, the toll remained at 4,633.

Californians weary of stay-at-home orders that have left millions unemployed staged displays of defiance, with hundreds of flag-waving protesters gathering at the Capitol and along a famed Southern California beach, while a sparsely populated county on the Oregon border allowed diners back in restaurants and reopened other businesses.

While much of the state’s population remained behind closed doors to deter the spread of the coronavirus, Gov. Gavin Newsom acknowledged the building anxiety while repeatedly teasing the possibility the state could begin relaxing some aspects of the restrictions next week.

“We are all impatient,” the governor said during his daily briefing, adding “We have to be really deliberative on how we reopen this economy.”

Newsom noted the state just passed the grim marks of 50,000 confirmed infections and 2,000 deaths but that hospitalization statistics are heading in a better direction and that has him hopeful.

In Sacramento, as police lined steps outside the Capitol, protesters waved signs that said “Defend Freedom” and broke into “U-S-A” chants, most eschewing face masks intended to deter spread of the virus.

A small plane circled overhead, displaying a banner carrying an image of Newsom’s face and the slogan, “End his tyranny.”

A New York City nursing home reported the deaths of 98 residents believed to have had the virus – a staggering death toll that shocked public officials.

It is hard to say whether the spate of deaths at the Isabella Geriatric Center, in Manhattan, is the worst nursing home outbreak yet in the US, because even within the city facilities have chosen to report fatalities in different ways.

An official state tally of nursing home deaths listed only 13 at the home as of Friday.

But officials at the 705-bed centre confirmed that through Wednesday 46 residents who tested positive for Covid-19 had died as well as an additional 52 people “suspected” to have the virus.

Some died at the nursing home and some died after being treated at hospitals.

The number of bodies became so overwhelming the home ordered a refrigerator truck to store them because funeral homes have been taking days to pick up the deceased.

Yemen reported the first virus case of the virus in a third province, raising the number of diagnosed infections to seven with two deaths in one of the world’s most vulnerable countries.

The United Nations says it fears the virus could be spreading undetected in the country where a five-year war has shattered health systems and left millions acutely malnourished.

The emergency coronavirus committee said in a Twitter post that a 40-year-old man was diagnosed with the infection in the southwestern Taiz governorate, the region’s first case.